Callum Clougher is on his hands and knees, and he knows he’s in trouble. Clougher, 19, a trainee at Marine... 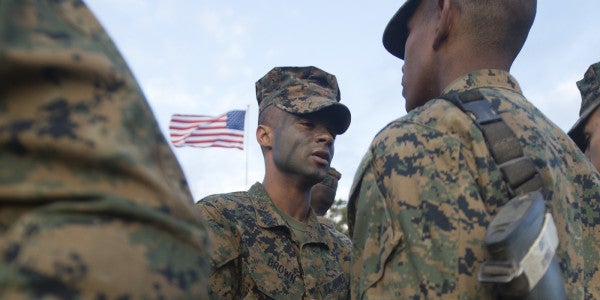 Callum Clougher is on his hands and knees, and he knows he’s in trouble.

Clougher, 19, a trainee at Marine Corps Recruit Depot Parris Island, has visions of graduating boot camp, returning to college and eventually becoming an officer, but at this moment on July 24, he only sees black spots.

His vision fades as he tries to breathe.

Moments earlier, the Cape Cod, Mass., native — whose 6-foot-6-inch frame stretches like a camouflage shoelace when he stands at attention — crumples to Platoon 3060’s squad bay floor. In the same room, fellow recruits are busy cleaning rifles and ironing uniforms ahead of India Company’s commander’s inspection. And nearby, five of his comrades are doing “incentive training” (IT) — punishment exercises — for failing to properly follow orders.

“High knees,” Platoon 3060 drill instructor Sgt. Quaylain Brown said Wednesday, recalling the IT session he’d directed nine days earlier. He held his arms in front of him and raised one foot at a time as high as he could, demonstrating the movement. “Basically running in place,” he said, a hint of rasp in his voice.

On July 24, as Brown “IT’s” the disobedient recruits, he sees motion out of the corner of his right eye. Clougher is on “all fours” with his hand held to his throat. Brown knows what’s wrong.

Brown dismisses the IT session and turns to his right.

He stands over Clougher and wraps his arms around the recruit.

Before he joined the Corps in 2011, Brown, 29, took nursing classes for more than a year at Louisiana State University Eunice; before that, he served as a Navy corpsman — where he’d learned the Heimlich maneuver.

This will be his first time performing it.

“I’m the type of person who always wants to be of service to people,” Brown said, crediting his mother for his mindset.

As a child he’d sometimes accompany her on shifts at the nursing home where she worked in the family’s hometown of Abbeville, La.

“He would help with the elderly,” Angela Brown-Washington, 53, said of her son. “He would get them something to drink, play cards with them. He would take them for walks.”

He was the third of four boys, she said, but he “took on the role of big brother at an early age.”

He’d join the Navy straight out of high school; Brown-Washington remembers the day she arrived home to find a strange car in the driveway and three Navy recruiters talking to her son.

“I shoo-ed them away,” she said. “At first I was totally against it, I’ll be honest.”

But she prayed about it, and she wanted her son to choose his own path.

He first met Marine instructors at Camp Pendleton, Calif., where he completed field medical service school. Marines don’t have their own medics; they rely on Navy corpsman to do the job. But the Marine instructors he met were impressive, Brown said, and he knew he wanted to join the Corps.

Later, during his first deployment as a corpsman to the Horn of Africa, the Marines he worked with treated him as one of their own. “I just got so used to the brotherhood,” he said.

After he joined the Corps, when he earned the rank of sergeant, he immediately submitted paperwork to be a drill instructor at Parris Island. He’s served as a DI since October 2015.

Until recently, he’d never had to save a life.

Now, as Brown wraps his arms around Clougher, he makes a fist, cupping it in his other hand and placing it below the recruit’s sternum.

He pumps his arms, his softball-sized biceps flexing as he does.

Clougher coughs up the silver-dollar-size bite of turkey sandwich that was lodged in his throat.

He’d been allowed to eat in the squad bay because he was classified as “sick-in-quarters,” having just had all four wisdom teeth removed.

“I had gotten a local anesthetic … so I couldn’t feel my face,” he said Wednesday. “That’s why I started choking, sir. … It was scary. … I started seeing black dots.”

Brown was awarded the Navy and Marine Corps Achievement Medal for his life-saving actions.

“These recruits are entrusted to my care,” Brown said, repeating the first line of the Drill Instructor Pledge, which he and his colleagues learned during Drill Instructor School, and which was administered to him by an officer when he took charge of Clougher’s platoon.

“I’ve always wanted to influence the future of the Corps,” he said. “It’s an honor.”

Right now, Clougher and his platoon are in their ninth week of boot camp. They just finished Basic Warrior Training. On the horizon is the Crucible, their final test.

His drill instructor ensured he has a chance to.