The general in charge of Marine Corps Recruit Depot Parris Island is under fire after saying in an interview that... 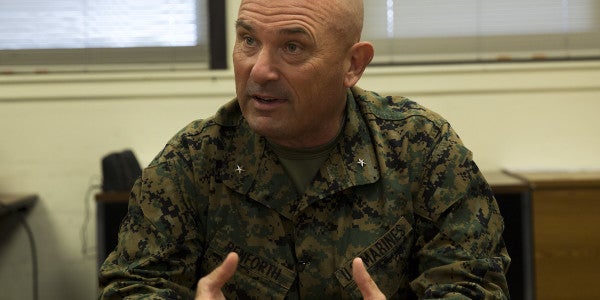 The general in charge of Marine Corps Recruit Depot Parris Island is under fire after saying in an interview that he preferred female recruits who played with hockey or lacrosse sticks rather than Barbie dolls.

In a Military.com interview regarding gender integration at the depot, Brig. Gen. Austin Renforth said its best to keep the early stages of bootcamp separated by gender because women have lower confidence levels and “it takes them a few weeks to understand that they can do more than they think they can.” Men, on the other hand, are “socially engineered” to be brave, he said.

“I think we’re trying to find, recruiting-wise, those women who were handed lacrosse sticks and hockey sticks growing up and not Barbie dolls. We don’t always get that,” he said.

The Barbie doll comment sparked social media outrage, including from some female veterans.

“Wow. Girls that are handed lacrosse sticks instead of Barbies? I served for many years rising to the Staff NCO ranks. I played with Barbies everyday and never cried at bootcamp,” a commenter said.

“When it comes to hockey, lacrosse, or Barbie dolls, quite frankly I could not care less what games a troop plays prior to making the commitment to become a United States Marine,” Walters said.