“Kurdish.” “ISIS.” “Terrorist.” These are the names Rekan Hawez said he was called by former Marine Corps Recruit Depot Parris... 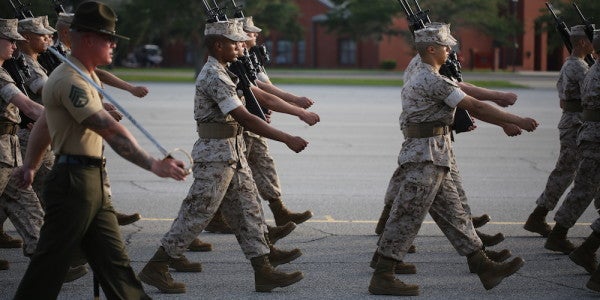 These are the names Rekan Hawez said he was called by former Marine Corps Recruit Depot Parris Island drill instructor Gunnery Sgt. Joseph Felix, who appeared Nov. 1 for the second day of his court-martial.

Hawez, 21, who immigrated to the U.S. from Kurdistan when he was a baby, is the third Muslim former recruit whom Felix allegedly targeted, according to government prosecutors.

A Nashville, Tenn., resident, Hawez testified that Felix ordered him into a commercial clothes dryer some time near the end of boot camp on Parris Island in the summer of 2015.

Related: The Marines Are Still Haunted By Their ‘Monster In The Closet’ As Abuse Trial Looms »

The incident is similar to what former recruit and current Marine Ameer Bourmeche said happened to him, with the exception that he was allegedly burned when a DI turned on the dryer he found himself crammed into that same summer.

Felix has been implicated in that incident, too. And he has been linked to the death of former recruit Raheel Siddiqui on March 18, 2016, an incident that spawned a hazing probe that resulted in the biggest hazing and abuse scandal at the depot since six recruits drowned in 1956 after being led into Ribbon Creek on a punitive nighttime march by their drill instructor, who’d been drinking earlier that day.

Felix is accused of multiple violations of military law, including maltreatment, obstruction, making a false statement and being drunk and disorderly. His court-martial is the highest-profile case to come out of Parris Island since then-Sgt. Matthew McKeon’s, the DI who led the march into Ribbon Creek. And it is the first public hearing for any Marine personnel linked to Siddiqui’s death.

No witnesses have testified yet about the Siddiqui incident, though a Marine Corps official said that could happen as early as Saturday. A judge has limited discussion of his death to the obstruction charge, and to explain why he can’t be present to testify about alleged maltreatment.

Siddiqui died after an alleged altercation with Felix; the recruit died of injuries sustained from a nearly 40-foot fall.

Hawez said Nov. 1 he didn’t report what happened to him until he was approached by investigators last November. The Corps learned about his alleged abuse through a Naval Criminal Investigative Service inquiry, according to Marine Corps Training and Education Command spokesman Capt. Joshua Pena. NCIS declined to comment on the matter because of the ongoing trial.

But Hawez, who was separated from the Corps with an other-than-honorable discharge in June 2016 — and said he didn’t want to testify because he “didn’t feel it was a serious issue” — also told of other alleged mistreatment at the hand of Felix.

Related: How To Prosecute A Marine — And How To Defend One »

Hawez was a former squad leader as a recruit and said Felix began singling him out shortly after the DI learned he was Kurdish.

He said Felix ordered his platoon, 3052 of Lima Company, 3rd Recruit Training Battalion, to drink multiple glasses of chocolate milk before making them do exercises. One recruit vomited while trying to drink the milk; Felix made another recruit drink the vomit, Hawez said.

Lance Cpl. James Pille testified that a drill instructor ordered him to bend over a stack of foot lockers and submit to a fake execution. Pille couldn’t identify the DI who gave the order; Bourmeche, a fellow former member of Platoon 3054, testified Tuesday that it was Felix.

When asked by prosecutors why he never reported the incident, Pille said, “Because that was part of boot camp.”

Other recruits told of Felix and other drill instructors entering the barracks in the weeks leading up to graduation and dumping laundry detergent on the floor, then ordering heavier recruits to lie on the floor to be used as human mops, while other recruits pushed them around.

One of his former platoon mates, Lance Cpl. Emil Mojica, remembers going to bed that night covered in detergent and waking up to burns on his stomach the next day. When asked why he didn’t report the incident, he said he wasn’t seriously hurt.

Related: Read A Marine Vet’s Letter To Parris Island After His Recruit Son Bragged A DI Choked Him »

The incident happened just after The Crucible, the last training challenge recruits face, after which they earn the title Marine. And Mojica said he’s since seen worse behavior elsewhere in the Corps, saying, “As a junior Marine, we do a whole lot worse things in the fleet.”

More than a half dozen recruits have testified so far. Some have claimed Felix is responsible for specific actions; others can’t remember details. Members of Felix’s defense team have been trying to poke holes in their testimonies and seem to be highlighting the fading memories of things that allegedly happened more than two years ago. The defense has also tried to show the eight-person jury — half officers, half enlisted men —how stories shared among recruits after boot camp might get conflated.

Pena said the command, TECOM, which brought the case, said it does not feel that the length of time between the alleged misconduct and the trial affects the credibility of the evidence.

And on Wednesday, the defense also scrutinized the investigation of incidents in Platoon 3054 conducted by Maj. Meghan Kennerly, who took the stand and said she initially recommended charging Felix with assault after learning of dryer incident and others in Bourmeche’s platoon.

So far, the testimony of former recruits is consistent in the sense that it describes violent and inappropriate behavior by drill instructors in the 3rd Recruit Training Battalion, whether or not they specifically link it to Felix.

“It’s boot camp,” Mojica said toward the end of his testimony. “Things like this happen.”