‘Bully’ Or Scapegoat? A Jury Will Decide This Parris Island Marine’s Fate

A military court has heard all evidence in the U.S. government’s case against a former Marine Corps Recruit Depot Parris... 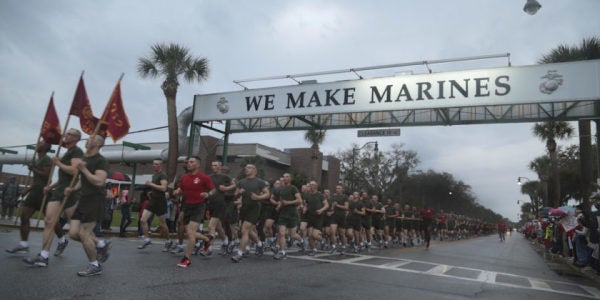 A military court has heard all evidence in the U.S. government’s case against a former Marine Corps Recruit Depot Parris Island drill instructor accused of hitting, kicking, choking and otherwise abusing nearly 20 trainees he was responsible for making into Marines.

That drill instructor, Gunnery Sgt. Joseph Felix, also is alleged to have singled out three Muslim recruits for what the prosecution called “special abuse.”

Felix’s defense team rested its case Wednesday morning, and it and the prosecution delivered closing arguments beginning that afternoon.

The prosecution painted Felix – who’s accused of multiple violations of military code ranging from cruelty and maltreatment to obstruction of justice – as a “bully” who established a culture of abuse that recruits were expected to take part in.

The defense cast Felix as a scapegoat, the victim of other drill instructors who had cut deals with the prosecution to save themselves in the wake of a hazing scandal at Parris Island. And lead defense attorney U.S. Navy Lt. Cmdr. Clay Bridges said the government’s case was “the definition of reasonable doubt,” the standard of proof in the case.

At stake are the career of Felix – a 15-year Marine Corps veteran – and the reputations of the Corps, Parris Island and the recruit training – the process of making Marines. The case is arguably the highest-profile court-martial regarding recruit abuse and hazing in the Corps since the infamous Ribbon Creek incident, during which six recruits drowned under the direction of a drill instructor who led their platoon on a punitive nighttime march after he consumed alcohol in April 1956.

Felix is being tried by general court-martial, the highest level of military court. Penalties in such cases include a wide range of possibilities, including dishonorable discharge, forfeiture of pay, demotion and prison time. He has pleaded not guilty to all charges.

An eight-person jury will now weigh testimony from dozens of former recruits about what happened in multiple instances in three separate training platoons years ago in a boot camp environment that is designed to confuse and disorient recruits and, arguably, by its very nature blurs the line between hard training and recruit abuse and hazing.

Thematically, their testimonies highlight what appear to be numerous violations of military law and Parris Island’s Recruit Training Order, the depot’s “bible” that governs boot camp. But the jury will have to decide if Felix is personally guilty of them, a task complicated by variances in testimony, the passage of time and the clarity of memory.

“Those little variations are what make it so believable,” prosecuting attorney Lt. Col. John Norman told the jury in his closing argument. Regarding the blur and chaos that is recruit training, he added: “No wonder they don’t see (the alleged incidents) exactly the same.”

But Bridges reminded the jury that he had made them a guarantee during opening arguments, that the government’s witnesses – and there were more than 75 of them, mostly former recruits, on the government’s list – would tell contradicting stories. And they made good on that guarantee, Bridges said Wednesday evening, at the beginning of his hour-and-a-half-long closing argument.

“In reality, (prosecutors) have thrown everything at the wall and (will) see what sticks,” Bridges said, alluding to the number of alleged violations – four, but with multiple counts and varying specifications – the government charged against Felix.

Some former recruits have testified that Felix personally hit them, kicked them and, in Lance Cpl. Ameer Bourmeche’s case, ordered them to perform humiliating acts such as a mock beheading of a fellow trainee.

Bourmeche and Rekan Hawez, both Muslim, said Felix ordered them into commercial clothes dryers on separate occasions. Bourmeche said he was burned when the dryer was activated, and said that he was interrogated about his faith and loyalty during the incident.

Hawez testified that Felix called him “ISIS” when ordering him into the dryer.

Felix is alleged to have called Bourmeche and former recruit Raheel Siddiqui – whose death moments after an alleged altercation with Felix spawned the hazing probe at Parris Island – a “terrorist.”

While some recruits testified to that fact, they took the slurs as jokes and didn’t think Felix meant anything by it. But others, such as former recruit and ex-Marine Bryce Herman, said Felix seemed “serious” when he said, “ ‘(Siddiqui) smells like a terrorist.’ ”

Siddiqui died March 18, 2016, after falling nearly 40 feet from his barracks on Parris Island. He was reportedly sick the day he died and attempting to request permission to go to medical. But he reportedly didn’t sound off appropriately, and Felix allegedly made him run a series of punitive sprints across the length of the barracks.

Former members of Siddiqui’s platoon testified that they saw him holding his throat while running before he collapsed to the floor. Witnesses testified that Felix stood over Siddiqui and slapped him. Some say it appeared Felix was trying to revive Siddiqui; prosecutors said the slap was a violation of the RTO and have charged it as maltreatment.

Shortly after the slap or slaps – some witnesses heard more than one – Siddiqui jumped to his feet and ran out the back door of the barracks, then vaulted over the stairwell. He died hours later at Medical University of South Carolina Hospital in Charleston.

The Corps has classified his death as a suicide. His family disputes that claim and has filed a $100 million federal lawsuit claiming negligence on behalf of the government.

“He acted as a bully,” Norman said of Felix, who did not testify Wednesday and sat, for the most part, expressionless in the small courtroom. “He bullied and brutalized the recruits of three training battalions. … Finally, if all of that wasn’t enough, the accused picked out three Muslim recruits for special abuse, (because of) their Muslim faith.”

Norman highlighted an instance of testimony in which Felix allegedly ordered one recruit to choke another. The recruit, Lance Cpl. Tyler Stanley, said he just fake-choked the other recruit. Another recruit, seeing that Stanley was faking, stepped in and finished the job, he testified. Norman called the incident an instance of the culture Felix established in his training platoons.

In its closing arguments, the defense continued to highlight contradictory testimony and discredit witnesses who the defense believed to have made inconsistent statements.

And the defense challenged the standards set forth in the RTO, citing a drill instructor who had testified how strict the document was and how violations of it were commonplace.

“The only thing that’s black and white about training a recruit on Parris Island are the words in the RTO,” Bridges said.

That leaves a lot of gray area, according to the defense.