After the impact launched him 20 feet through the air, Marine Corps Cpl. Miles Hogan got up, checked himself for... 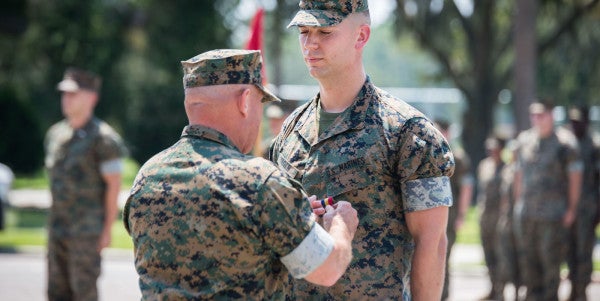 After the impact launched him 20 feet through the air, Marine Corps Cpl. Miles Hogan got up, checked himself for broken bones and sprinted back to the man he’d been trying to save.

Moments earlier on that February 2016 night, Hogan — who was returning to Marine Corps Recruit Depot Parris Island — had watched through his windshield as the man’s sedan rear-ended a slow-turning minivan and then veered into oncoming traffic.

According to a news release by the Marine Corps, Hogan pulled over and ran to the man’s aid.

“I opened the door and the man takes his seat belt off, and I grabbed under his arms to help him stand up,” Hogan told a Corps public affairs officer. “As soon as I pull him to me I took one step back and another car had hit us head on.”

That’s when Hogan and the man found themselves flying through the air.

Hogan collected himself and ran back to the man — still in danger as he lay in the road — and dragged him to the shoulder. According to the Corps, Hogan noticed the man’s eyes were dilated and that he was having trouble looking left and right.

“Hogan gave the man a concussion test, and attended the man until paramedics arrived on the scene,” according to the release. “Following the incident Hogan was hospitalized for a bruised kidney and minor lacerations from the broken glass.”

For his life-saving actions — risking his own life to perform them — Hogan, a musician with the Parris Island Marine Band, was awarded the Navy and Marine Corps Medal at ceremony at the depot last Thursday.

“This was something I was looking forward to,” Renforth said, according to the release. “This is something that gives me great pride and great joy that one of our own decided to put his personal safety at risk to help somebody else, because that is what we do as Marines 24/7.”

The Navy and Marine Corps Medal is “is awarded to any person who distinguishes them self by heroism not involving conflict with the enemy,” according to the Corps. The life-saving action must be performed “at the risk one’s own life.” It is the highest medal for non-combat bravery.

“The whole situation shouldn’t be an uncommon thing,” Hogan said.

“I did it because I would want somebody to do it for me. It’s what you do, especially as a Marine, that’s what our reputation is built on.”