Alexandra Marberry, after graduating from the Naval Academy, became one of the nation's first transgender women allowed to transition while serving in the military. Now she's fighting the Navy to clear her record of sexual misconduct she maintains she did not commit. She believes she was targeted for being transgender 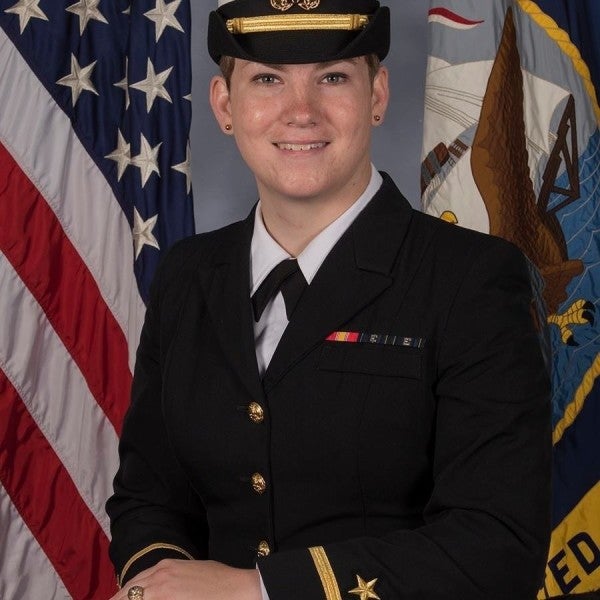 Alexandra Marberry, after graduating from the Naval Academy, became one of the nation's first transgender women allowed to transition while serving in the military.

More than two years later, Marberry is fighting the Navy to clear her record of sexual misconduct she maintains she did not commit. She believes she was targeted for being transgender.

In a GoFundme page posted Saturday, Marberry explains the circumstances surrounding her discharge and asks for help paying back the $59,621.62 she now owes for failing to complete her service obligation after graduating from the Naval Academy.

In October 2016, Marberry was permitted to transition while on active duty, after spending time in limbo. She planned to train as a pilot, but while awaiting further guidance from the Defense Department, worked in an administrative role at the Naval Academy.

That year, the Defense Department under former President Barack Obama rolled out a new policy allowing transgender service members to transition to their gender identity during service. President Donald Trump rolled back these protections, first outright banning transgender people from serving in the military via Twitter. The Defense Department later refined the ban to place significant restrictions on transgender people who might want to serve.

Under the updated policy, transgender people who want to serve in the military can do so as long as they do not wish to transition so that their biological sex matches their gender identity. The Supreme Court last month upheld the amended ban while lawsuits move through the courts, but there is still one injunction barring the administration from carrying it out.

From January 2017 to September 2017, Marberry served as a gunnery and ordinance officer on the USS Winston S. Churchill. In June, a commanding officer called her into a meeting and told her she had to be off the ship in an hour, she said.

Marberry was forced to resign, she wrote on the GoFundme page, after another officer accused her of groping. She denies the accusation.

“I had been falsely accused of groping a transphobic officer who I had originally believed was an ally,” she wrote.

The Naval Criminal Investigative Service launched an investigation, which found no evidence of misconduct and recommended no further action, Marberry wrote. During the investigation, she was reassigned to an administrative position in Little Creek, Virginia.

Her commanding officer held a non-judicial punishment hearing, an administrative hearing that allows commanders to discipline troops without a court-martial, and found her guilty, Marberry said.

An NCIS official did not immediately respond to questions about the investigation.

A superior officer recommended discharging her from the Navy, Marberry wrote.

“I fought that too, but eventually it came down to a choice I was offered: resign or be forcefully separated,” Marberry wrote. “I 'chose' to resign with dignity, but the misconduct was placed on my permanent record, and my discharge was not the full Honorable discharge I should have received.”

She submitted her resignation in June. The Navy formally separated Marberry in October.

Marberry is working with lawyers to get her debt erased and her service record changed to remove the misconduct, she she said during a phone conversation Thursday, which has kept her from getting jobs.

WATCH NEXT: A Transgender Airman's Story