A California man who has called the Holocaust “a lie” and claims Jews conspired to stop him from winning a... 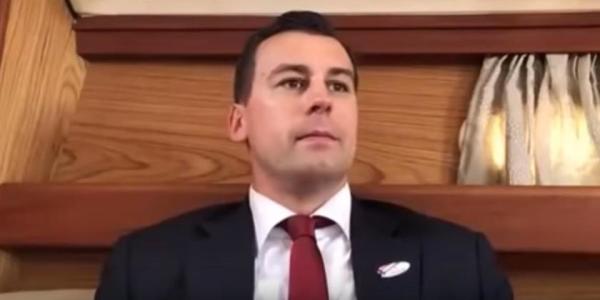 A California man who has called the Holocaust “a lie” and claims Jews conspired to stop him from winning a U.S. Senate race says he plans to establish a “regional capital” in North Idaho.

Sandpoint, Washington State, residents this week told The Spokesman-Review they had received a bizarre automated phone message from Patrick Little, a neo-Nazi who has called for a United States “free from Jews” and who recently mounted a failed campaign to unseat five-term Democratic Sen. Dianne Feinstein.

Two residents shared recordings of the minutelong robocall, in which Little speaks over an instrumental version of The Rembrandts’ 1995 song “I’ll Be There for You” – a tune best known as the theme for the sitcom “Friends.”

“America has a Jewish problem,” Little says at the start of the call. “To the people of Sandpoint, Bonner County, North Idaho: My name is Patrick Little, and I’ll be arriving shortly to make Sandpoint one of my new regional capitals throughout the country. This area has a reputation as a home to people with the moral courage to recognize the consequences of diversity.”

Little goes on to claim he’s traveling across the country, “engaging with folks on the problems we face and how to solve them together as the extended family our European people are.” He says he’ll arrive in Sandpoint in mid-August, adding, “If you see me, Patrick Little, I’d be honored if you come up and let me shake your hand.”

He ends with another broad-brush characterization of North Idaho, saying the region “has some of the best people anywhere, brought up in the old American pioneer spirit of hard work, family values, common sense and fighting off the nation-wrecking plans of leftists – and their Jewish controllers who aim to ruin our people forever.”

One Sandpoint resident, who asked not to be named, said she received the call Tuesday from a toll-free number that also appears on Little’s website.

Little, who is in his mid-30s, did not respond to messages seeking comment. On his website, he describes himself as “a Mainer by birth, a husband by choice, an experienced IT engineer” and a veteran of the U.S. Marine Corps in Afghanistan.

Little was denounced by the California Republican Party and kicked out of a party convention in San Diego in May, and afterward he protested outside the building while standing and spitting on the flag of Israel.

He appears to have at least one ally in Sandpoint: Scott D. Rhodes, a California transplant who has used robocalls to attack Jews and other minorities in Spokane and several California cities.

Alex Quilici, the owner of YouMail, a California-based company that markets a robocall-blocking app, recently told the Southern Poverty Law Center that Rhodes’ use of mass-calling appeared to mark the first time the technology had been used to spread such hateful messages.

“It’s sadly clever and powerful,” Quilici told the SPLC, explaining that robocalls can be generated quickly, easily and for as little as a penny per call.

“These tools mean hate is not a local issue,” he said. “It’s not a man with a sign in front of a school. It’s a guy spreading his message of hate on a national or global basis, using an effective media platform.”

Rhodes, who also spews racist vitriol in a series of self-recorded videos at TheRoadToPower.com, shares Little’s belief that the U.S. government has long been controlled by Jews working at the behest of Israel. The so-called Zionist Occupation Government conspiracy theory has resulted in white supremacist slogans such as “Smash ZOG,” “Kill ZOG” and “Death to ZOG.”

In May, Rhodes sent out robocalls telling California residents to “relocate to North Idaho, where very white is very right.” In another automated message, he urged people to vote for Little and called Feinstein “a traitorous Jew.”

Afterward, Little wrote on Gab, a social media site popular among white supremacists: “My sides split every time I hear that robocall. Goyim, the robocall was great work, whoever did that.”

“Goyim” is plural for “goy,” a Hebrew name for a non-Jew that is used by the alt-right to mock Jewish people. Rhodes, another Gab user, also regularly uses the term.

Although one poll by SurveyUSA showed Little had the support of 18 percent of likely voters in California – second only to Feinstein’s 39 percent – Little came in 12th place in the June primary, a defeat he claimed was the result of vote-rigging.

“Stay strong,” he told his supporters in a post on his website. “We will march forward towards victory, exposing this massive scandal and the Jewish supremacists behind it. We will achieve more victories in 2020 when I run for President.”

Rhodes, who has also used the surname Platek, appears to have moved to Sandpoint from San Francisco in 2015, the same year hateful robocalls targeted Sandpoint’s liberal mayor, Shelby Rognstad, during his election campaign.

Late last year, police identified Rhodes as the man who had distributed racist CDs in the parking lot of Sandpoint High School. He also was suspected of harassing at least one Sandpoint resident, and he captured the interest of police in Alexandria, Virginia, after city leaders there received threatening, anti-Semitic calls from a phone number tied to him and an Idaho-registered company.

In June, some Spokane residents received a robocall from Rhodes defending a Spokane Transit Authority executive who had been accused of making racist comments on Facebook.

And last month, KTVU, a Fox affiliate in California’s Bay Area, reported that Rhodes appeared to be responsible for robocalls supporting John Fitzgerald, a candidate for Congress who had espoused many anti-Semitic views.

“End the Jewish takeover of America and restore our democracy by voting for John Fitzgerald for U.S. Congress,” the calls said, over an instrumental version of the 1966 Buffalo Springfield hit “For What It’s Worth.”