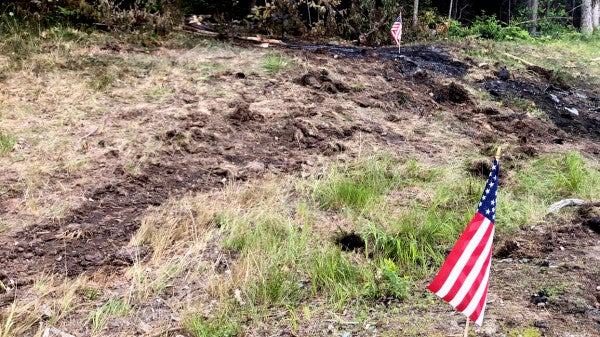 Patrios owner Robert Kraft surprised the Jarheads Motorcycle Club Saturday with a six-figure donation to help the families of the seven motorcyclists who were killed in a crash in New Hampshire last month.

Kraft, who attended the club’s gathering in Gillette Stadium, announced the $100,000 donation to the club’s GoFundMe campaign, according to reports from WBZ and NBC 10.

The crowdfunding campaign launched earlier this month raised $66,000 in less than a day. As of Saturday afternoon, the campaign has more than $560,000.

A 2016 Dodge 2500 crashed into a group of 10 people riding motorcycles June 21 while on Route 2 in rural New Hampshire. They were members of the Jarhead Motorcycle Club, a group of U.S. Marine Corps veterans and their spouses. Seven died in the crash, including a couple from Lakeville, Massachusetts.

The truck burst into flames after the crash. The driver, Volodymyr Zhukovskyy, was not injured.

Zhukovskyy was arrested days later at his West Springfield home on a fugitive from justice charge. He faces seven counts of negligent homicide. Immigration and Customs Enforcement placed a detainer on Zhukovskyy, who is a Ukrainian national. His father told the Boston Herald that Zhukovskyy is a green card holder.

The Massachusetts Registry of Motor Vehicles failed to suspend Zhukovskyy’s license despite being notified of a May OUI arrest in Connecticut and his refusal to take a chemical test, which should have triggered a license suspension. The fatal crash triggered a state review of the agency, which had a backlog of out-of-state notices.

The agency issued more than 2,000 suspensions pertaining to 1,607 drivers as of Friday.

Thousands of motorcyclists, including some traveling from as far as California, joined in a memorial ride to honor the victims, known as “The Fallen 7.”

Motorcyclists from across New England and from as far as California met in Laconia, New Hampshire Saturday morning and planned to ride in a procession to the scene of the crash in Randolph, N.H.

Hundreds of people gathered at Gillette Stadium in Foxborough for the service, WBZ reported. The club is accepting donations at the gathering.

Earlier in the day, dozens of motorcyclists and supporters protested at the steps of the State House demanding an audit of the Registry of Motor Vehicles, WBZ reported. Others held signs calling for secured borders, saying undocumented immigrants shouldn’t be allowed to obtain licenses. They pointed to Zhukovskyy’s immigration status, though he has a green card.

“The man should not have been driving. That should never have happened,” a man who only identified himself as Michael told MassLive. He walked around outside the State House, holding a sign saying “Trump won fair and square” after the crowds died down.

SEE ALSO: Driver Arrested For Plowing Into Marine Motorcycle Club Had Suspected Heroin In His Home