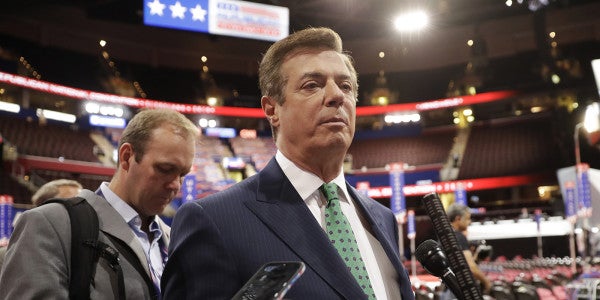 Manafort walked into the FBI's field office with his lawyer Kevin Downing in Washington, DC, at about 8:15 a.m. on Oct. 30. An FBI agent greeted him and his lawyer as they entered the building.

The indictment was unsealed Monday morning, and it contains 12 counts: conspiracy against the United States, conspiracy to launder money, unregistered agent of a foreign principal, false and misleading FARA statements, false statements, and seven counts of failure to file reports of foreign bank and financial accounts.

Manafort-gates Indictment Filed and Redacted by Rebecca Harrington on Scribd

Manafort has been at the center of the special counsel Robert Mueller's investigation into whether Trump's presidential campaign colluded with Moscow before the 2016 election. The indictments against Manafort and Gates are the first since James Comey launched the investigation over a year ago. Mueller took over the investigation after Comey was fired as FBI director in May.

Manafort was forced to step down as Trump's campaign chairman in August 2016, but Gates stayed and worked on Trump's transition team. He was ousted from a pro-Trump lobbying group in April amid questions about Russia's election interference, but he continued to visit the White House as late as June, according to The Daily Beast.

Legal experts speculated over the weekend, after news of the sealed indictments broke Friday, that Mueller would arrest Manafort in an effort to get him to “flip” against Trump.

Trump tweeted on Oct. 30 that the allegations came “years ago, before Paul Manafort was part of the Trump campaign. But why aren't Crooked Hillary & the Dems the focus?????”

“Also, there is NO COLLUSION!” he added in a follow-up tweet.

Sorry, but this is years ago, before Paul Manafort was part of the Trump campaign. But why aren't Crooked Hillary & the Dems the focus?????

….Also, there is NO COLLUSION!

The FBI conducted a predawn raid on Manafort's home in July. Manafort was told at the time that he would be indicted, according to his longtime friend Roger Stone. Investigators were looking for tax documents and foreign banking records that are typically sought when investigating violations of the Bank Secrecy Act.

Manafort has been associated with at least 15 bank accounts and 10 companies in Cyprus, dating back to 2007, NBC News reported in March, and the FBI has issued grand-jury subpoenas to several banks for Manafort's records. Gates' name appears on documents linked to many of those Cyprus companies, according to The New York Times.

BuzzFeed News reported on Oct. 29 that the FBI was looking at 13 suspicious wire transfers made by Manafort-linked offshore companies from 2012 to 2013.

Manafort's representatives have said he has been cooperating with investigators' requests for relevant documents. But the search warrant obtained by the FBI in July indicated that Mueller managed to convince a federal judge that Manafort would try to conceal or destroy documents subpoenaed by a grand jury.

The indictments issued Oct. 27 were sealed, and Manafort's attorneys did not receive a target letter, raising similar questions about whether Mueller thought Manafort would try to flee or destroy evidence if he were notified of his impending arrest three days beforehand.

Legal experts saw the July raid as a sign that something very serious was coming.

A former Department of Justice spokesman, Matthew Miller, said a raid coming months into an investigation in which the subject's attorneys had been speaking with, and presumably cooperating with, the DOJ “suggests something serious.”

“Manafort's representatives have been insisting for months that he is cooperating with these investigations, and if you are really cooperating, DOJ typically doesn't need to raid your house — they'll trust you to respond fully to a subpoena,” a former Department of Justice spokesman, Matthew Miller, said at the time.

Manafort's ties to Russia came under scrutiny in August of last year, when The New York Times discovered that a pro-Russian political party in Ukraine designated him $12.7 million in undisclosed cash payments. Manafort, a longtime Republican operative, had advised the party and its former leader Viktor Yanukovych for nearly a decade.

On March 22, the Associated Press reported that Manafort was paid $10 million from 2006 to 2009 to lobby on behalf of the Russian billionaire Oleg Deripaska, a close ally of Russian President Vladimir Putin, using a strategic “model” that the AP said Manafort wrote would “greatly benefit the Putin Government if employed at the correct levels with the appropriate commitment to success.”

Manafort has insisted that he has never received any illicit cash payments. But he has a “pattern” of using shell companies to purchase homes “in all-cash deals,” as WNYC has reported, and then transferring those properties into his name for no money and taking out large mortgages against them.

Manafort's tendency to form shell companies to purchase real estate is not illegal. But it has raised questions about how much and by whom Manafort has been paid throughout his decades as a political consultant.

The Wall Street Journal reported last week that Manafort was the subject of a new money-laundering investigation in New York.

Manafort also attended a meeting last year at Trump Tower with Trump's son Donald Trump Jr. and son-in-law Jared Kushner as well as two Russian lobbyists who were said to have offered dirt on Hillary Clinton.