Russia is trying to lure Trump into a dangerous prisoner swap over a Marine vet, intelligence officials say

Paul Whelan, the former U.S. Marine convicted on espionage charges in Moscow last week, will not pursue an appeal of his 16-year sentence and hopes instead to be returned to the U.S. in a prisoner swap, his lawyer said Tuesday 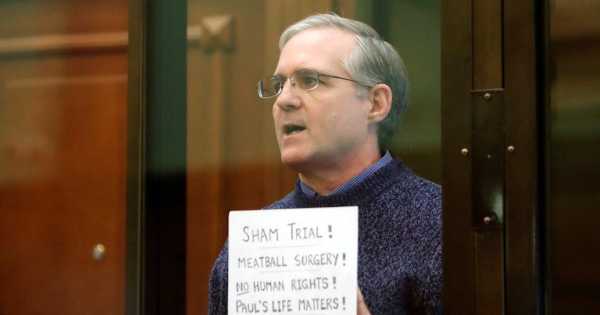 Paul Whelan, the former U.S. Marine convicted on espionage charges in Moscow last week, will not pursue an appeal of his 16-year sentence and hopes instead to be returned to the U.S. in a prisoner swap, his lawyer said Tuesday.

“Today, we met [Whelan] in the detention facility and after a discussion it was decided not to appeal the verdict because he doesn't believe in Russian justice,” said Vladimir Zherebenkov, according to Interfax news agency.

“He hopes that he will be swapped in the near future for Russians who have been convicted in the United States.”

Whelan was arrested in Moscow in late December 2018 and accused of being a “spy mission.” Russia said Whelan was caught with a USB drive containing state secrets, though Whelan said the drive was planted in his room by a Russian acquaintance.

Almost immediately after the court handed down his sentence last week, there was speculation that Whelan was being shopped by Russian officials to entice the US into a prisoner exchange.

The US currently holds two Russians in prison, both of whom are of extreme interest and value to the Russian security services and President Vladimir Putin.

They are the famed arms trafficker Viktor Bout, who is currently serving a 25-year prison sentence for attempting to sell weapons to a terror organization; and Konstantin Yaroshenko, who is serving 20 years in a US federal prison for cocaine trafficking.

'A chance to deal with Trump'

Within days of Whelan's conviction, Russian diplomats had begun quietly pitching a swap for Bout, with some discussions including Yaroshenko in any potential deal, three NATO intelligence officials told Insider.

The three officers spoke on condition of anonymity, but their identities are known to insider. One of them personally tracked Bout until his 2008 arrest in Thailand at the request of the U.S. Drug Enforcement Administration (DEA).

“The Russians have been pushing for Bout since Trump took office. I've been in some conversations personally where the subject is raised,” said one intelligence official from Belgium, where Bout operated an air-transport operation in the 1990s that was closely linked to arms trafficking and illegal diamond smuggling.

The official, who remains operational, said that for two decades it was clear that Bout had operated with the protection and endorsement of the Russian security services, with the “highest level of protection in Moscow.”

“Bout was one of the first hybrids designed for profit-intelligence-style operations we saw out of Russia,” the source said, referring to private-sector agents who work for governments and militaries.

“It's always been clear that he was an operational member of their intelligence services even as he delivered guns around the world under the guise of 'Air Transport.'”

“As a result, the Russians very aggressively fought to keep him from being extradited from Thailand [to the U.S.] and it remains a top priority to trade for him,” the official said.

“Whelan's arrest, on very obviously specious charges, has given them a chance to deal with Trump, who we have seen aggressively pursues such deals because they're good public relations and he needs political wins as the November election draws closer.”

While both the US and Russia have been quiet on the possibility of a swap that includes Bout — who has about 18 years left on his prison sentence in America — multiple officials have said internal discussions are underway.

One person familiar with the issue, who did not want to be identified or quoted directly, told Insider that federal prosecutors in the Southern District of New York, which handled Bout's conviction, had attempted to organize resistance to a possible prisoner swap for Whelan.

However, the replacement of the U.S. attorney at that office over the weekend has pushed those efforts aside, the source said.

Alex Yearsely, director of the London-based security firm Martello Risk, described any swap for Bout as completely irresponsible, but a plausible event in light of Trump's apparently warm relationship with Putin.

Yearsely had spent years tracking Bout's activities in his previous role as director of research at Global Witness, a nonprofit investigating corruption.

“The utter crassness of [considering] a prisoner exchange for Victor Bout, a world leader in death, mayhem, and destruction shows the total contempt the Trump administration has for human rights, justice and their own government,” he said.

There is no public indication that the Trump administration is considering a prisoner exchange with Bout.

“The risks taken by the DEA undercover teams and operators to bring one of the world's leading illegal arms dealers to justice would be forever besmirched by this crass decision by an unhinged and unpopular despot,” Yearsley said.

But even beyond the basic morality of trading for Bout — a figure notorious enough to have inspired a Hollywood film — the Belgian official has a broader concern: Value.

“Unless Whelan is really a U.S. agent, which nobody actually thinks, then trading him for Bout would be terribly poor value and sends a dangerous message for future swaps,” the official said.

“Bout was one of the biggest intelligence operators of his era, a man with knowledge of arms deals and operations around the world for more than two decades. His freedom would be an extraordinary sigh of relief for Russian intelligence.”

“Whelan simply isn't in the same category. These trades only work when made for similar value. This would very much look like giving Putin a gift if they really do this.”