On December 7, 1941, the U.S. naval fleet stationed at Pearl Harbor suffered a devastating attack from the air and sea 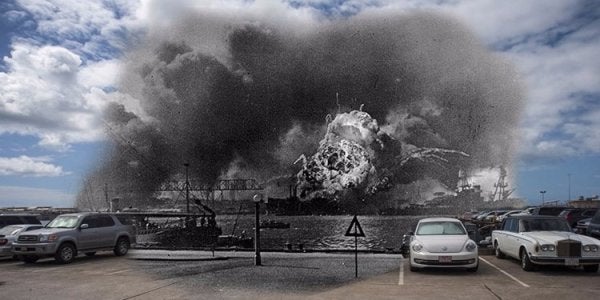 Editor’s note: a version of this post first appeared in 2018.

On December 7, 1941, the U.S. naval fleet stationed at Pearl Harbor, Hawaii, suffered a devastating attack from the air and sea.

The Japanese assault began around 8 a.m., resulting in the deaths of 2,403 Americans, numerous injuries, and the sinking of four battleships, and damage to many more.

Surprised U.S. service members who normally would have slept in on that Sunday morning or enjoyed some recreation found themselves fighting for their lives.

In 2013, the U.S. Navy remembered the “day of infamy” with a series of photo illustrations overlaying scenes from that horrifying date with present-day photos.

Now, 79 years after the attack, here’s what Pearl Harbor looked like then and now. A view of the historic Ford Island control tower from 1941. The tower was once used to guide airplanes at the airfield on the island. It is now an aviation library

The USS Shaw explodes during the attack

The battleship USS Arizona burns during the attack, as viewed from Ford Island Hangar 6 on Ford Island stands badly damaged after the attack