A surge in demand for attack submarines and the lengthening of Virginia-class subs to carry more missiles has the Navy examining building its first new dry dock at Pearl Harbor since World War II or creating a 650-foot floating dry dock to better maintain its Pacific-based undersea fleet. 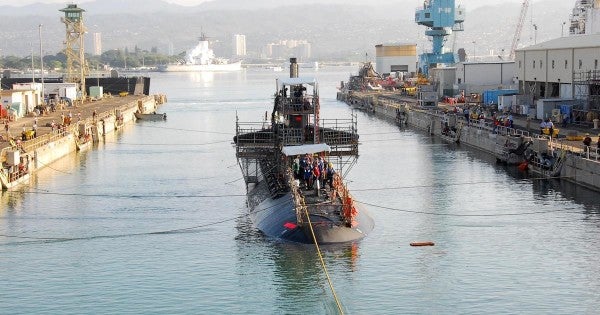 A surge in demand for attack submarines and the lengthening of Virginia-class subs to carry more missiles has the Navy examining building its first new dry dock at Pearl Harbor since World War II or creating a 650-foot floating dry dock to better maintain its Pacific-based undersea fleet.

In response largely to military advances made by China and Russia, the United States is frantically working on modernizing its forces — and, in tandem, improving maintenance times.

Vice Adm. Thomas Moore, commander of Naval Sea Systems Command, told a congressional committee Dec. 4 that Pearl Harbor shipyard will be the first to receive a dry dock production facility, “which, as currently envisioned, will enclose multiple dry docks and move much of the production work to the waterfront.”

U.S. Sen. Mazie Hirono of Hawaii pegged the preliminary cost estimate of the new facility at between $1.5 billion and $2 billion.

Moore told Hirono at the hearing that “you have my commitment. You're going to get either a new graving (dry) dock or a floater, and you are going to get a dry dock production facility that's going to be state-of-the-art.”

Colleen O'Rourke, a spokeswoman for Naval Sea Systems Command, said in an email that the facility “is still being designed, making it premature to say exactly what it will look like.”

Beyond that, the Navy delivered four 150-ton heavy-lift transporters that allow for the removal of Virginia-class propulsors and shafts, with three more expected in the near future.

During maintenance work on the submarine USS Asheville, meanwhile, a “digital twin” virtual representation of the shipyard was created, Moore said.

“Once the full capability is delivered in February 2020, the Navy will use this data to reimagine the shipyard to improve productivity, safety and the quality of life of our shipyard personnel,” Moore said.

A November report by the Congressional Research Service on China's naval modernization warned that “China's navy is viewed as posing a major challenge to the U.S. Navy's ability to achieve and maintain wartime control of blue-water ocean areas in the Western Pacific — the first such challenge the U.S. Navy has faced since the end of the Cold War.”

The Navy in late 2018 said it planned to spend $5 billion over 20 years to improve Pearl Harbor shipyard's aged infrastructure and to accommodate an expected increase in Virginia-class submarine work as part of its Shipyard Infrastructure Optimization Program.

At the time, the Navy talked about extending the 497-foot Dry Dock 3 inland and with a deeper “flood basin” at the entrance, as well as modifications to 1,088-foot Dry Dock 4 to better support submarine maintenance.

The Navy in November issued a “request for information” to see whether floating dry docks “are a viable and cost-effective alternative to graving (land-based) docks” for submarines “of all classes” at Pearl Harbor. Being sought were concepts and costs for a dry dock with a minimum 650-foot length and a production facility contained within the “wing walls” of the structure.

The request for information was sought “to determine if a floating dry dock would be a better option to expanding an existing dock or building a new one,” O'Rourke said.

The 377-foot Virginia-class subs are longer than the older Los Angeles-class they are replacing, and those built with what's known as a “Virginia Payload Module” will have an additional 84-foot midbody section with four vertical launch tubes capable of firing 28 Tomahawk missiles.

The improvement ups the $3.2 billion sub's torpedo-size weapons to 65 from about 37, a congressional report said.

According to the U.S. Government Accountability Office, all but Dry Dock 3 at Pearl Harbor can accommodate the new 460-foot lengthened Virginia subs. Construction begins this year with the first delivery in 2025.

Preliminary design work is underway on the dry dock production facility at Pearl Harbor, with construction anticipated to start in 2024, the Navy said.

Gilday said he wants a focus on readiness, and “in the readiness section, the first thing I talk about is ships' maintenance, and we're getting 35% to 40% of our ships out of maintenance on time. That's unacceptable.”

The Naval Sea System's Moore said the four public shipyards are improving on-time performance and are focused on increasing capacity, improving training and improving productivity. The workforce has been increased to 36,696 in 2018 from 27,368 in 2010, he said.