Gabriel Romero, a sailor on the submarine USS Columbia, fatally shot two civilian workers and wounded a third while the Los Angeles-class vessel is in Dry Dock 2 for a two-year overhaul 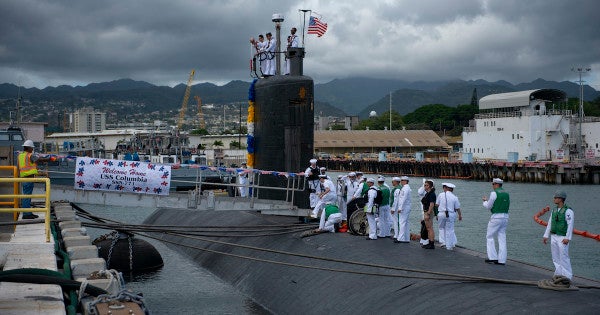 The troubled 22-year-old Pearl Harbor sailor identified as shooting three shipyard workers Wednesday and then killing himself may have come from a troubled ship.

Gabriel Romero, a sailor on the submarine USS Columbia, fatally shot two civilian workers and wounded a third while the Los Angeles-class vessel is in Dry Dock 2 for a two-year overhaul, according to The Associated Press and other sources.

Joint Base Pearl Harbor-Hickam was not able to provide information Thursday on a report that multiple suicides have occurred on the Columbia.

Questions have arisen as to how a sailor entrusted to be on sensitive submarine duty and with weapons as part of a dry-dock security detail could have fired on shipyard workers.

Bryan Clark, a former submariner now with the Center for Strategic and Budgetary Assessments, said submariners don't go through a special psychological screening, but they do get annual physicals where problems can be observed.

“And then also your crewmates will watch you very closely because you are in a very small crew in a very confined space,” Clark said.

Military officials and the FBI are expected to hold a news conference this morning to provide the names of the deceased after next of kin were notified.

Tara Kapoi told The Associated Press that her 30-year-old husband, Vincent Kapoi Jr., was one of those killed. She said he worked at the shipyard and grew up in Waianae. “We don't know what happened,” she said Thursday.

A third man, 36, who was shot was taken to The Queen's Medical Center and was listed in stable condition Thursday morning.

Joint Base Pearl Harbor- Hickam was put on lockdown after the gunfire as military security forces as well as multiple law enforcement agencies and emergency medical responders arrived on scene.

The 2:30 p.m. shooting occurred in the Pearl Harbor Naval Shipyard, which has its own secured “controlled industrial area.” Sources said the shooting took place not at the dry dock, but a bit away from it near a couple of buildings.

Some who work on base complained that the text alert system that provides notices of exercises did not not warn of an “active shooter” — even though a lockdown was put into effect.

The shipyard, which has more than 6,000 employees, remained shut down through Thursday with the exception of emergency work. The yard is expected to reopen today.

A statement issued by the White House late Wednesday said, “The President has been briefed on the shooting at Joint Base Pearl Harbor- Hickam in Hawaii and continues to monitor the situation.”

The tragedy cast a pall over the upcoming 78th anniversary of the Dec. 7, 1941, attack. As more than two dozen Pearl Harbor survivors and World War II veterans have been arriving to red carpet treatment and a hero's welcome, the Pearl Harbor Visitor Center was also closed to incoming visitors Wednesday afternoon as Navy patrol boats loitered offshore.

Capt. Greg Burton, commander of the Pearl Harbor Naval Shipyard, issued a message to shipyard personnel that was posted on Facebook.

Burton said “no words will convey the full measure of sorrow” from the deaths of two workers in the shipyard and wounding of another.

“This loss will be felt throughout our shipyard 'ohana, greater shipyard & (Naval Sea Systems Command) family, submarine force, and the Navy as a whole,” Burton said.

“Looking ahead, we will honor the life and legacy of those lost. Even now, as we mourn the loss of members of our 'ohana, please take the opportunity to reconnect with each other and to reinforce and strengthen the bonds with each other. We value each one of you deeply and we are here for you,” he said.

Clark, who served on four different submarines during his Navy career, said it's common to have a “topside watch” on a submarine that's armed to protect the ship when in port.

Normally, armed sentries will be on top of the boat and on the pier to check identification. “Depending on your proximity to an outside (harbor) barrier, and depending on the threat situation, you may or may not issue different weapons to your topside watch-standers,” Clark said. “So it's not surprising at all that he might have an M-4 and 9 mm.”

He added that the military “has had issues in the past where people have committed suicide or shot somebody else with their service weapons, and it's obviously something that we try to be very careful about.”