On the anniversary of Pearl Harbor, just 3 survivors of the USS Arizona remain

Meet the last three survivors of the USS Arizona, which was sunk on Dec. 7, 1941 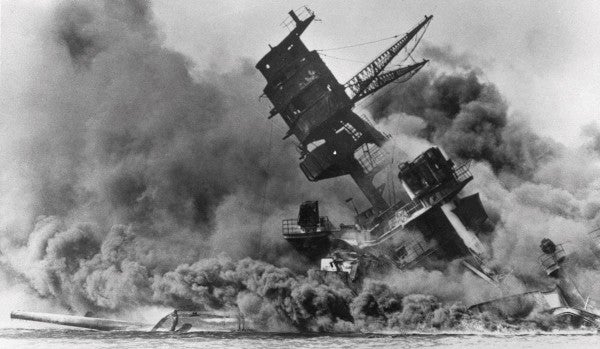 Ceremonies for Pearl Harbor Day, are already under way on Oahu despite a shooting spree that left three people dead on Wednesday. Officials vow to continue with the traditional Dec. 7 Pearl Harbor commemoration.

Today we take a look at the last three survivors of the USS Arizona, which was sunk on Dec. 7, 1941.

In September, Lauren Bruner, the next-to-last sailor to escape the sinking USS Arizona on Dec. 7, 1941, died in Los Angeles at age 98. His death leaves just three of the 337 men who survived the attack on the battleship.

Bruner was 21 when the attack occurred. He took a machine gun bullet to the leg and was badly burned.

He spent seven months in a hospital, then returned to duty on a destroyer that saw eight major engagements during the war.

Stratton was 19 at the time of the attack. He was burned over 65% of his body, and escaped the inferno by climbing across a line to a neighboring ship — the USS Vestal. Stratton and Bruner were saved by a man named Joe George. George never knew if the men he saved lived, and it wasn't until nearly 60 years later that his daughter Joe Ann knew the full extent of her father's heroism. Stratton and Bruner campaigned for George to be recognized, and at last year's ceremony at Pearl Harbor, George was awarded a Bronze Star with “V” for Valor.

A bridge in Colorado Springs was named in Stratton's honor in 2018.

Stratton's memoir of his experiences during the attack titled, “All the Gallant Men” was published in 2016.

Lou Conter was 20 during the attack. He was an enlisted man who had recently been accepted to flight school. After the bombs stuck the Arizona, he tried to save as many men as possible, and his orders sank with the ship.

It wasn't until January 1942 that an admiral found out about the orders and straightened things out.

Conter got his wings in 1942 and flew bombing missions in the South Pacific.

In 1943 his plane went down in shark-infested enemy waters and all 10 of the crew made it out alive.

He served with the Navy through the Korean War, during which he flew 29 missions. He retired as a lieutenant commander in 1967 and became a successful real estate developer in Palm Springs. He resides in Grass Valley.

Ken Potts was 20 during the surprise attack. He was in Honolulu when the planes swooped in over Oahu. He and many other sailors found a ride to the harbor and helped rescue men from the ships. He was ordered off the Arizona just before a bomb hit and sent it to the bottom in minutes.

Potts spent the rest of the war in Navy intelligence on Oahu. After the war he returned home to Provo, Utah, and a career in construction and selling used cars.

He has returned to the memorial service in Hawaii several times. In 2011, a high school band from Provo was invited to perform on the 70th anniversary of the attack. The band took up a collection to bring Potts as a guest of honor. After the band won a trophy, it dedicated and gave it to Potts in thanks for his service.

In 2019, according to Veterans Affairs statistics, there are about 390,000 WWII veterans alive of the more than 16 million that served. About 294 died each day in 2018, on average, and approximately 10% reside in California, the most of any state.