Pearl Harbor veteran to be interred on his sunken ship

Nearly eight decades after the attack on Pearl Harbor, Lauren Bruner's ashes will be delivered to the sea that cradled his fallen comrades, stored in an urn inside the battleship's wreckage 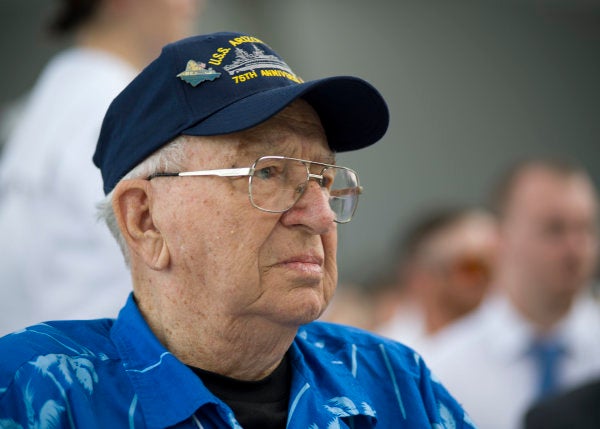 Just before 8 a.m. on a Sunday morning 78 years ago, Lauren Bruner was preparing for church services and a date that would follow with a girl he'd met outside his Navy base.

The 21-year-old sailor was stationed as a fire controlman aboard the U.S. battleship USS Arizona, overseeing the vessel's .50-caliber guns.

Then alarms rang out. A Japanese plane had bombed the ship in a surprise attack.

It took only nine minutes for the Arizona to sink after the first bomb hit. Bruner was struck by gunfire while trying to flee the inferno that consumed the ship, the second-to-last man to escape the explosion that killed 1,177, including his best friend; 335 survived.

More than 70% of Bruner's body was burned. He was hospitalized for weeks.

Now, nearly eight decades after that fateful day, Bruner's ashes will be delivered to the sea that cradled his fallen comrades, stored in an urn inside the battleship's wreckage.

Bruner, who died in his sleep Sept. 10 at age 98, will be the 44th and final crew member to be interred at the site, a decision he made nearly 30 years ago. The last three surviving members of the Arizona's crew have all chosen to be laid to rest with their families.

A moment of silence will be observed at 7:55 a.m. Hawaii Standard Time on Saturday (9:55 PST), the exact moment the bombings began so many years ago, followed by an annual public ceremony at Pearl Harbor to remember those killed in the attack.

Lou Conter, 98, one of the last three surviving crew members, will be at the interment, coordinated by the U.S. Navy and the National Park Service and attended by about 160 loved ones of Bruner.

In Colorado Springs, Colo., fellow survivors Donald Stratton, 97, and Ken Potts, 98, will watch a livestream of the event alongside the daughter of Joe George, the man who saved Stratton and Bruner when he tossed them a rope from the repair ship Vestal 100 feet away, which the men used to pull themselves to safety.

“I was there when he was strafed by a passing Japanese plane — wounded in his leg. He watched me climb across the burning water to relative safety aboard the Vestal, and I encouraged him to keep going when it was his turn to cross,” Stratton said of Bruner.

“The bonds of brotherhood are forged working side by side, but nothing connects men more than going through something like that. We were lucky, blessed, to make it out of there.”

In 2017, Stratton and Bruner presented the Bronze Star for valor posthumously to George by way of his daughter, Joe Ann Taylor, at the Pearl Harbor memorial in Hawaii. Stratton said it was a defining moment for both of them.

“We were the lucky ones to escape, thanks to Joe. If I could ask one thing, it would be for people to remember the ones who died, the ones who never really got a chance to live. Remember their stories,” he said. “Remember our story and never let something like this happen again.”

Bruner was an easygoing man who enjoyed a slice of pizza and a cold beer. He regaled people with stories, hesitant only when it came to discussing the events of Dec. 7, 1941. He outlived two wives and a longtime girlfriend whose family considers him their own.

Ed Hoeschen, 59, met Bruner 15 years ago when he moved in next door to the veteran's La Mirada home. Soon after, the history buff began to accompany Bruner to veterans ceremonies and events, where Bruner would share his memories from World War II and the Pearl Harbor attack that killed more than 2,300 Americans.

“Never forget — that's all he wanted people to do,” Hoeschen said of Bruner's efforts to preserve the stories of the so-called Greatest Generation.

If Bruner spoke to 300 children about the war and just one of them picked up an interest in World War II, “then he did his job,” Hoeschen said. “That's all he cared about.”

Kelcea Holbrook, 30, a National Park Service employee, struck up a friendship with Bruner at Pearl Harbor nearly a decade ago when both realized they were from the same small town in Washington.

On Saturday, she and Hoeschen will deliver the urn containing Bruner's ashes to scuba divers, who will secure it inside the sunken ship the sailor once called home. A 21-gun salute will follow the ceremony.

“I promised him I would be sure that I would be back here to help make sure his interment was a dignified military event that would honor him,” Holbrook said.

The ceremony honors those who survived, while also offering a reminder of the lives lost, said Daniel Martinez, chief historian for the Pearl Harbor National Memorial. Much of it takes place before a large, white marble wall engraved with the names of the sailors and Marines who died on the Arizona on that fateful day.

“It's a celebration of a life well lived,” Martinez said.

The somber service comes just days after a Navy sailor shot three civilians at Pearl Harbor, killing two of them before taking his own life.

Thousands are scheduled to gather at the base Saturday. Rear Adm. Robert Chadwick, the commander of Navy Region Hawaii, said security will be evaluated to determine whether it should be upgraded before the annual remembrance ceremony. About a dozen survivors of the 1941 attack are expected to attend, along with dignitaries and service members from all branches of the military.

The Navy began interring Pearl Harbor veterans in 1982 at two of the ships sunk in the attack: the Arizona and the battleship Utah, where 60 people died. Three have been interred at the Utah, and of the remaining three survivors, at least one wants his ashes to rest with the ship.

Of the sailors and Marines who died on the Arizona, more than 900 could not be recovered from the wreckage. A memorial built in 1962 marks their watery graves.

As time fades for the last survivors of the Pearl Harbor attack, the preservation of history is of growing importance to those still living. In September, the San Diego chapter of the Pearl Harbor Survivors Assn., perhaps the last in the country still in operation, held its final meeting. When the group began in 1963, it had 586 members. Only seven remained when it closed its doors.

Hoeschen said Bruner wanted to be buried aboard the Arizona to ensure that his friends could visit. The USS Arizona Memorial is one of Hawaii's most popular sites, with more than 1 million visitors a year. It was closed this year to repair a loading dock safety hazard.

“I thought, well, all my buddies are right here. And there are a lot of people who come to see the ship,” Bruner told the Associated Press in 2016.

After the sun sets and Bruner's remains are laid to rest, ceremony guests will crowd into a nearby bar that Bruner frequented. There, squeezed into a space the size of a two-car garage, the veteran's loved ones will share a toast in celebration of their hero.

“One thing that's remained a constant is that I always brought him home,” Hoeschen said. “I get to bring him home one last time.”