Pelosi says Democrats will draft articles of impeachment against Trump

U.S. House of Representatives Speaker Nancy Pelosi on Thursday said she has directed a House committee to draft articles of impeachment against President Donald Trump over his effort to pressure Ukraine to investigate a political rival, a historic step that sets up a fight over whether to oust him from office. 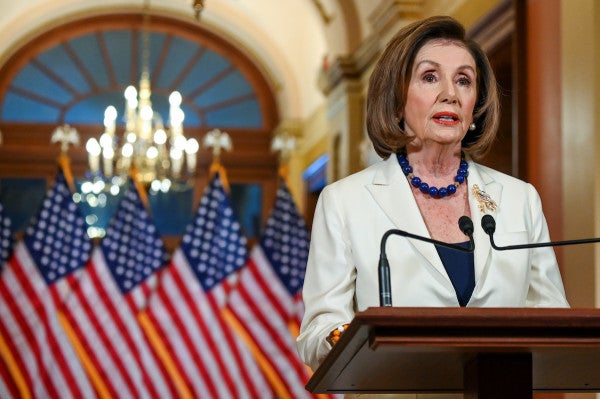 WASHINGTON (Reuters) – U.S. House of Representatives Speaker Nancy Pelosi on Thursday said she has directed a House committee to draft articles of impeachment against President Donald Trump over his effort to pressure Ukraine to investigate a political rival, a historic step that sets up a fight over whether to oust him from office.

“The president abused his power for his own personal political benefit at the expense of our national security by withholding military aid and (a) crucial Oval Office meeting in exchange for an announcement of an investigation into his political rival,” Pelosi said in a televised statement.

The impeachment fight undertaken by House Democrats is unfolding even as the Republican president is running for re-election in 2020.

“Sadly, but with confidence and humility, with allegiance to our Founders and our hearts full of love for America, today I am asking our chairman to proceed with articles of impeachment,” she added, referring to House Judiciary Committee Chairman Jerrold Nadler.

Pelosi made the remarks a day after the Judiciary Committee held a hearing in which three constitutional law experts called by Democratic lawmakers said Trump had engaged in conduct that represents impeachable offenses under the Constitution. A fourth expert called by Republican lawmakers called the Democratic-led impeachment inquiry rushed and flawed.

Articles of impeachment represent formal charges against Trump and would originate in the Judiciary Committee before going to the full House. If the Democratic-led House passes articles of impeachment as expected, that would lead to a trial in the Senate on whether to convict Trump of those charges and remove him from office. Republicans control the Senate and have shown little support for Trump's removal.

White House spokeswoman Stephanie Grisham said on Twitter that Pelosi and other Democrats “should be ashamed,” adding that Trump “has done nothing but lead our country – resulting in a booming economy, more jobs & a stronger military, to name just a few of his major accomplishments. We look forward to a fair trial in the Senate.”

The three law professors chosen by the Democrats made clear during Wednesday's hearing that they believed Trump's actions constituted impeachable offenses including abuse of power, bribery, obstruction of Congress and obstruction of justice.

The House Intelligence Committee this week submitted findings from its inquiry into Trump's push for Kiev to launch an investigation related to former U.S. Vice President Joe Biden, a top contender for the 2020 Democratic presidential nomination. Trump also asked Ukraine to look into the discredited theory promoted by the president and his allies that Ukraine, not Russia, meddled in the 2016 U.S. election.

Democrats have accused Trump of abusing his power by withholding $391 million in security aid to Ukraine – a U.S. ally facing Russian aggression – to pressure Ukrainian President Volodymyr Zelenskiy to announce the investigations.

“Our democracy is what is at stake. The president leaves us no choice but to act because he is trying to corrupt, once again, the election for his own benefit. The president has engaged in abuse of power, undermining our national security and jeopardizing the integrity of our elections,” Pelosi said.

Trump has denied any wrongdoing and called the impeachment investigation a hoax.

The House may vote by year's end on the formal impeachment charges, but Democrats, who control the chamber, say no decision has been made at this point on the specific charges. Those could include abuse of power, bribery, obstruction of Congress and obstruction of justice.

Judiciary panel Democrats on Wednesday said they may look beyond Trump's relations with Ukraine to include Trump's earlier alleged efforts to impede former U.S. Special Counsel Robert Mueller's investigation into his 2016 campaign's relations with Russia, but they stopped short of saying that could trigger a separate charge.

No president has ever been removed from office through impeachment, though Republican Richard Nixon resigned in 1974 after the House began the impeachment process in the Watergate corruption scandal. Two other presidents were impeached by the House but acquitted by the Senate.

The last impeachment effort in the United States came in 1998 when a Republican-led House passed articles of impeachment against Democratic President Bill Clinton – charges arising from a sexual relationship he had with a White House intern. The Senate then acquitted Clinton in 1999, leaving him in office.

The other president who was impeached was Andrew Johnson, impeached by the House in 1868 – three years after the end of the U.S. Civil War – but left in office by the Senate.

Trump's fellow Republicans in both chambers have stood by him, and have accused Democrats of seeking to overturn the 2016 election.

Republican Representative Andy Biggs, who sits on the House Judiciary panel, told Fox News earlier on Thursday: “What we are seeing is a rush – rush – to impeachment.”

“I think you're going to see several articles of impeachment so there's a menu there. … That's the type of political shenanigans that are going to go on here to undermine the election of 2016,” Biggs said.

Republicans in the Senate have given no signs they would break with the president now.

Ahead of Pelosi's statement, Trump urged House Democrats to move quickly if they were going to impeach him so that the Senate could take up the issue.

“If you are going to impeach me, do it now, fast, so we can have a fair trial in the Senate, and so that our Country can get back to business,” Trump tweeted.

Polling has shown Americans are also largely divided along party lines over impeachment.