Vice President Mike Pence has undertaken a kind of “freedom of navigation” operation of his own over the disputed South... 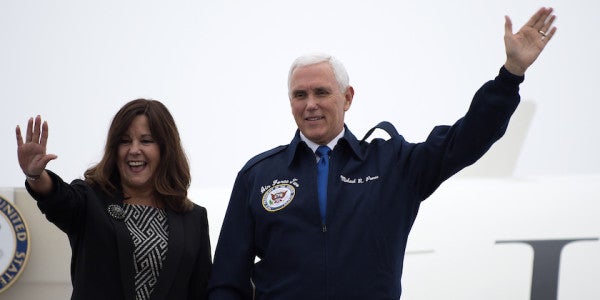 Vice President Mike Pence has undertaken a kind of “freedom of navigation” operation of his own over the disputed South China Sea, an interview published Tuesday revealed ahead of Pence’s visit to Singapore for a series of meetings in the region.

In an interview with Washington Post columnist Josh Rogin in which Pence focused on the White House’s Indo-Pacific policy, the vice president said his trip to the region “is meant to show the United States has no intention of ceding influence or control” to Beijing.

As part of this push, Pence had met with Prime Minister Shinzo Abe on Tuesday in Tokyo, where the two discussed, among other things, China’s increasingly assertive posture in both the South China Sea and broader region.

On the way from Tokyo to Singapore, where Pence was due to attend meetings of the Association of Southeast Asian Nations, the vice president’s plane passed over the South China Sea — flying some 30 km (50 miles) — from the contested Spratly Island chain, where China has constructed military facilities on artificial islands.

Rogin quoted the vice president as telling him that “the flight was something of a freedom of navigation mission in and of itself.”

“We will not be intimidated,” Pence told him. “We will not stand down. We will continue to exercise freedom of navigation.”

The U.S. does not have a claim in the South China Sea, but the navy has conducted what it calls freedom of navigation operations, known as FONOPs, in the waterway. Those missions, Washington says, are meant to enforce the right of free passage in international waters under international law.

Beijing has lambasted the operations, claiming that it respects freedom of navigation, and that the FONOPs are merely a pretext for containing China.

China has repeatedly said that it has “indisputable sovereignty over the South China Sea islands and its adjacent waters,” but Vietnam, Taiwan and the Philippines, Malaysia and Brunei also have overlapping claims in the waterway, which includes vital sea lanes through which about $3 trillion in global trade passes each year and where the U.S., Chinese, Japanese and some Southeast Asian navies also routinely operate.

Asked what would happen if Beijing fails to agree to act in Asia in a way that can avoid “a new Cold War” with the United States, Pence appeared to accept that such a reality could be inevitable.