Pence: We won’t be retiring the USS Truman after all

Vice President Mike Pence visited the Truman at its Norfolk homeport Tuesday, addressing a group of sailors after touring the ship. 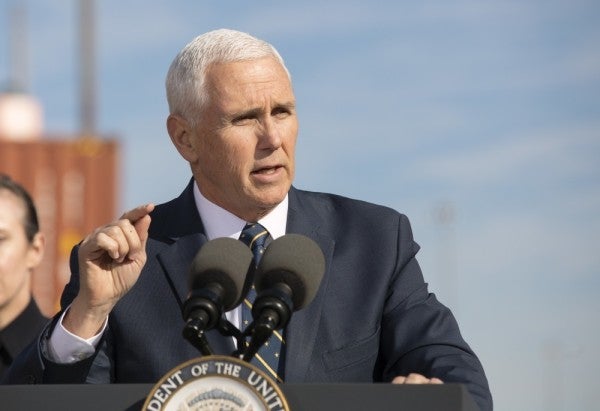 Editor's Note: This article by Hope Hodge Seck originally appeared on Military.com, a leading source of news for the military and veteran community.

The same day the nominee for next top officer of the Navy defended service plans to retire the carrier Harry S. Truman halfway through its planned service life, the vice president of the United States paid a visit to the carrier itself to deliver a message from the president himself: The Truman will stay open for business.

Vice President Mike Pence visited the Truman at its Norfolk homeport Tuesday, addressing a group of sailors after touring the ship. He spoke for roughly 20 minutes, hailing administration plans to invest heavily in shipbuilding and restore “the arsenal of democracy.” After praising the crew of the Truman for its accomplishments on the carrier's most recent deployment in support of the fight against the Islamic State, Pence delivered his news.

“As we continue to fight Congress to make sure the military has the resources you need to accomplish your mission, President Donald Trump asked me to deliver a message to each and every one of you on the deck of the USS Truman,” Pence said. “We are keeping the best carrier in the world in the fight. We are not retiring the Truman. The USS Harry S. Truman is going to be giving them hell for many more years to come.”

However, it's not Congress that Trump will be fighting to keep the Truman in business, but the Navy itself. Service leaders have actually gone toe-to-toe with lawmakers to explain that retiring the Truman rather than investing in its midlife refueling availability will allow the Navy to spend more on new technology, including unmanned surface vessels and other cutting-edge developments.

Pence did not provide any additional details on how the Truman would be saved from retirement, but recounted the high points of its most recent eight-month deployment, which wrapped up in December.

“During each deployment in its prolific career, the USS Truman has taken the fight to the enemy on our terms on their soil, particularly when it comes to the battle against radical Islamic terrorism,” he said. “The USS Truman launched over 2,000 sorties throughout the Middle East in the last year alone, and 7,500 sailors who serve in the Truman's carrier strike group played an essential part in crippling ISIS, bombarding their territory, I'm told, with nearly 1,600 precision munitions, the most of any carrier strike group. And now the ISIS caliphate's territory is no more. Job well done, Truman.”

The Truman was commissioned in 1998; its midlife refueling overhaul had been tentatively scheduled for 2024.