The armored amphibious vehicle that caught fire on Camp Pendleton Wednesday morning, sending 14 Marines and a Navy corpsman to... 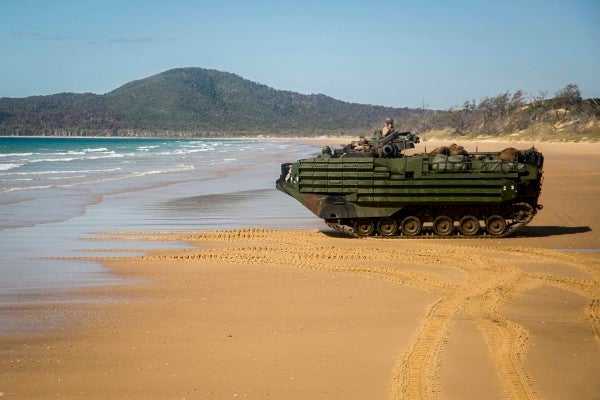 Although San Diego Gas & Electric Co. supplies natural gas to the sprawling North County base, the utility said it was not an SDG&E; line that ignited.

“We are aware of a gas incident that occurred on Camp Pendleton on Wednesday. We investigated and determined that an SDG&E; gas line was not involved,” said Sempra Energy spokesman Joe Britton.

The brass at 1st Marine Division remained tight-lipped about the blaze that engulfed the Assault Amphibious Vehicle — called an “Amtrack” by the troops — around 9:33 a.m. Wednesday in the San Mateo section of the base.

Crewed by members of the 3rd Assault Amphibian Battalion, it was carrying a detachment from 1st Battalion, 1st Marine Regiment during the land-based portion of a pre-deployment Marine Corps Combat Readiness Evaluation when the vehicle struck a gas line that was away from the main roadway.

In a Camp Pendleton utility guide published on Aug. 16, 2016, the Marine Corps mandated numerous safety measures for natural gas pipelines latticing the base.

All aboveground pipes and components are required to be primed and painted yellow — which identifies natural gas — and labeled. All new lines located in vegetated areas or located away from paved areas require special markers indicating the presence of natural gas. Markers are mandated on or near all taps, tees and caps continuously along natural gas lines so that Marines can see them from afar, too.

Marine Corps officials at both the Pentagon and Camp Pendleton declined to say whether maps showing known gas lines were provided to the troops planning or conducting the exercise; whether ditches and other areas that held the pipes were marked as out of bounds for vehicle traffic during the training event or whether the unit had been briefed about potential safety risks posed by nearby natural gas lines before they kicked off the exercise.

The San Diego Union-Tribune could not determine if base officials even knew that a natural gas line was there or were aware who installed it.

Officials also declined to say whether the Marines were wearing their flame-resistant organizational gear or FROG, designed to prevent very serious burn injuries.

FROG comes in both desert and olive color scheme and consists of a long-sleeved tunic or T-shirt, trousers, gloves and a balaclava for the face and head. There’s a hinged face guard that can attach to a Kevlar helmet.

Tougher than steel, the Kevlar plastic used in the head gear and the Small Arms Protective Insert on a Marine’s vest and back — the “SAPI plates” — resists both blunt force trauma and high heat. FROG gear is supposed to protect the body from flames where the Kevlar ends.

When units deploy overseas, the Marine Corps swaps out their FROG kit with the Enhanced Fire Resistant Combat Ensemble, an upgraded flame-resistant material and self-extinguishes fire, drastically reducing the incidence and severity of burn injuries, according to Marine Corps Systems Command.

The level of FROG or EFRCE apparel worn by infantrymen and armor crewman usually is determined by a unit commander, an order that is issued before the training begins.

“The accident is under investigation and we will make no comments until it is completed,” Gainey said.

Six of the service members taken to area hospitals were listed in critical conditions and another six were marked serious. One was in stable condition.

Two others were treated for minor injuries at Camp Pendleton, but Marine officials declined to say whether any had been released

UC Irvine Medical Center has Orange County’s only Level I trauma center and only regional burn center. One of only five American Burn Association-verified centers in Southern California, it treats about 300 adult and pediatric burn survivors annually.

In 2009, the Burn Center at the University of California San Diego medical center also was certified by the American Burn Association. It treats about 450 burn victims each year.

Since Camp Pendleton is equidistant from both Irvine and San Diego, it made sense to split the majority of patients between hospitals, said UC Irvine Health spokesman John Murray.