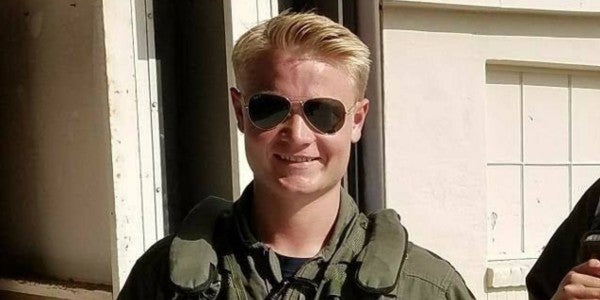 Joshua Kaleb Watson has been identified as one of the victims of a shooting at the Naval Air Station Pensacola, CBS News reported.

The 23-year-old Alabama native and Naval Academy graduate was named to the Academy's prestigious Commandant's and Dean's lists, and also competed on the rifle team,
Alabama's WTVY reported.

Watson's brother
wrote in a Facebook post reported by CBS that after his brother was shot, he alerted responders to the attack, saving “countless lives.”

“My youngest brother gave his life for his country in a senseless shooting,” Adam Watson wrote. “After being shot multiple times he made it outside and told the first response team where the shooter was and those details were invaluable.”

“He died a hero and we are beyond proud,” Watson added.

Watson was among four people, including the shooter, who died in the attack, according to a tally by the Escambia County Sheriff's Office, which said three were killed at the base and one died at a local hospital.

Seven other people, including
two officers who were shot while responding to the attack, were injured when the shooter stormed a classroom and opened fire.

Initial reports said authorities had identified the suspect in the attack as
a foreign national who was training at the base. The suspect was later identified as 2nd Lt. Mohammed Saeed Alshamrani, an aviation officer in the Saudi Air Force who began training in the United States in 2017.

Defense Secretary Mark Esper said in a statement
reported by the Associated Press that the Pentagon was continuing to monitor the attack in addition to an ongoing investigation into a shooting that came two days earlier at the Pearl Harbor base, where a Navy sailor shot two people before killing himself.

The AP reported that investigators were still probing the shooter's motive and possible ties to terrorism.

The U.S. Navy did not immediately return Insider's request for comment.