The Pentagon is seeking 100,000 body bags for civilians in COVID-19 pandemic

The Pentagon is seeking to provide as many as 100,000 military-style body bags for potential civilian use as the U.S. warns that deaths could soar in the coming weeks from the coronavirus pandemic 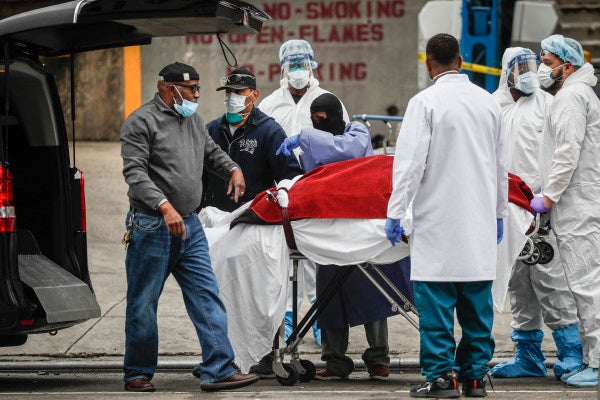 WASHINGTON — The Pentagon is seeking to provide as many as 100,000 military-style body bags for potential civilian use as the U.S. warns that deaths could soar in the coming weeks from the coronavirus pandemic.

The Federal Emergency Management Agency has requested 100,000 body bags, known as Human Remains Pouches, through an interagency group that directed it to the Defense Department. The Pentagon is looking into buying more bags and will draw some initially from a stockpile of 50,000 it maintains, according to two people familiar with the request.

The move is a somber counterpoint to the Pentagon’s highly praised deployment of two hospital ships to New York and Los Angeles to help alleviate pressure on regional hospitals overburdened by the pandemic.

The Defense Logistics Agency’s Troop Support unit manages the Pentagon’s stockpile of the green nylon, 94-inch by 38-inch body bags that are typically distributed to war zones. The unit has been in contact with the current contractor to assess its manufacturing capabilities but hasn’t yet placed a formal order, according to one of the people.

As many as 200,000 Americans are projected to die in the U.S. coronavirus outbreak, a top White House official said Tuesday, even with another 30 days of the most stringent public health restrictions in place. Reviewing the projections, President Donald Trump warned Americans of a difficult period ahead.

“This is going to be a painful two weeks,” Trump said at the White House on Tuesday. “Our strength will be tested, our endurance will be tried.”

The government had not previously shared details on its projections for the spread of the virus, which has so far killed more than 4,400 people in the U.S. and infected more than 200,000.

The Defense Logistics Agency doesn’t yet have a specific delivery date request from FEMA but the agency wants them as soon as they are ready, and the Pentagon is close to agreement with its current contractor on the numbers and time lines, one of the people said.

A FEMA spokesman said the agency is making “prudent planning” for potential future needs, and that includes preparing for “mortuary contingencies” from U.S. states.

The pouches may be necessary for some state and local governments, but FEMA hasn’t received a shipment yet, the spokesman said. The agency is working with regional and state health and emergency managers to ramp up available assets, the official said, adding that pouches will be distributed to states requesting them.

On Monday, the vice director of operations for the Joint Chiefs of Staff outlined the general Pentagon-FEMA process that’s in place.

The Joint Staff is “in close partnership with them to identify what their needs are,” including “mission assignments” that came in Monday for prepackaged Meals Ready to Eat, and “other supplies,” Maj. Gen. Jeff Taliaferro said.

The Joint Staff also received “a mission assignment from FEMA for a mortuary affairs support team for New York and we’re in the process of identifying” personnel, he added.

Hospitals in places including New York and New Jersey have been securing refrigerated trucks to help hold bodies in areas where capacity for storing them has run out.