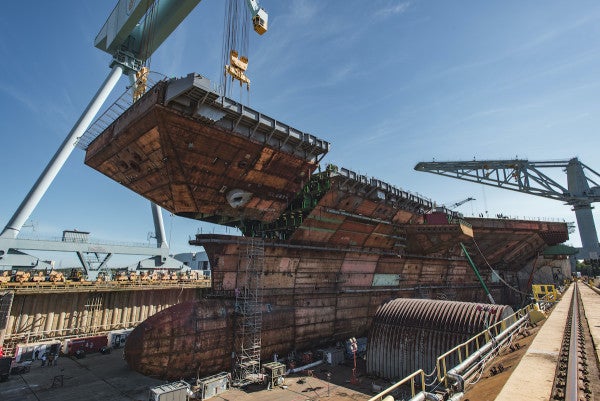 The Pentagon's top acquisition official said this week that the Defense Department expects the economic impact of the novel coronavirus (COVID-19) on supply chains to delay major weapons programs for three months.

The biggest domestic disruption has been in the aviation, shipbuilding, and the small-space-launch sectors, Ellen Lord, undersecretary of acquisition and sustainment, said Monday.

“Right now there isn't any specific COVID penalty that we see for a specific [defense] program; however, we do anticipate about a three-month slowdown,” Lord said.

Just as it's injected uncertainty into industry, COVID-19 has upended timelines in Congress, where the House Armed Services Committee is working to prepare drafts of the 2021 National Defense Authorization Act by May 1, even as the bill's September 30 deadline moves out of reach.

“The likelihood that it slips past October 1 is obviously increasing by the day,” Rep. Adam Smith, committee chairman, told reporters on April 7.

But the economic contraction seems likely to hit the Pentagon in years to come.

Defense spending was expected to shrink, and discussions about how best to spend it have already started. Smith said he thought “those conversations will accelerate, because economically we're not coming out of this for a while.”

“Even the best-case scenario, this is going to have a profound economic impact,” Smith added. “I think it's going to become even more important that we look for ways to save money within” the Defense Department.

Those estimates could mean $350 billion to $600 billion less for the Pentagon over the next decade, if defense spending stays at its current 3.2%-of-GDP level, according to the RAND analysts, who noted that share is projected to fall to 2.8% in 2030.

That would have “significant medium-term implications for the defense budget” and require the Pentagon “to find efficiencies that are of at least the same magnitude as the recent sequestration,” the Rand analysts write, referring to the Budget Control Act of 2011.

Sequestration was created as an enforcement mechanism for deficit caps that Congress put in place in the mid-1980s. The Budget Control Act of 2011 reimposed sequestration and capped defense spending; total cuts to the Defense Department under it were close to $500 billion over 10 years.

The Pentagon has been able to shift spending to create room for new initiatives, but a sudden and unplanned-for decrease in funding would make trade-offs between maintaining force structure and developing future systems “much more pressing,” according to Mark Cancian, a retired Marine colonel and senior adviser at the Center for Strategic and International Studies.

“In other words, if you really wanted to invest in high-end capabilities to take on the Chinese, you're going to have to cut a lot of force structure, and that's hard when you have global commitments that are demanding deployment of forces,” Cancian told Insider earlier this month.

'Some back and forth'

Cancian said cuts in 2022 and beyond would depend largely on the result of the November presidential election.

“If there were a second Trump administration, [the budget would be] probably flat in constant terms; maybe there'd be a little upward motion,” Cancian said. “But if there were a Democratic administration then we'd certainly see some reduction, maybe quite substantial, like sequestration … I think that's probably the right image.”

Even before COVID-19 struck there were calls to reassess defense spending and US national-security priorities.

“The Pentagon has failed two audits, and it's such an enormous part of our budget, and if any major corporation were to fail its audit, the shareholders would kick them out,” Rep. Pramila Jayapal, a Democrat from Washington state, said at an event hosted by Foreign Policy magazine and the Quincy Institute think tank in February.

“The bigger question among Democrats that we haven't sorted out … is to determine exactly what to do with the defense budget,” with different camps advocating freezing, reducing, or imposing drastic cuts, said Julianne Smith, a foreign-policy adviser to former Vice President Joe Biden, the presumptive Democratic presidential nominee, at the same event.

“That's a debate that the party's going to have to have, and frankly all Americans need to have,” Smith added.

If a Biden presidency comes to be, it would likely face a stronger Democratic left that “will put pressure on him to cut defense and invest in social priorities,” to which Biden would likely assent to some degree, Cancian said.

But changes to defense priorities and spending on them will be influenced by other factors.

“Things happen in the world. There could be some event that changes people's thinking. That's what happened to Obama,” Cancian said. “The Congress could shift, so we'll get some back and forth.”