The Defense Department is deploying an additional 540 troops to the U.S. border with Mexico to keep migrants potentially infected with the novel coronavirus (COVID-19) from entering the country, the head of U.S. Northern Command said Wednesday 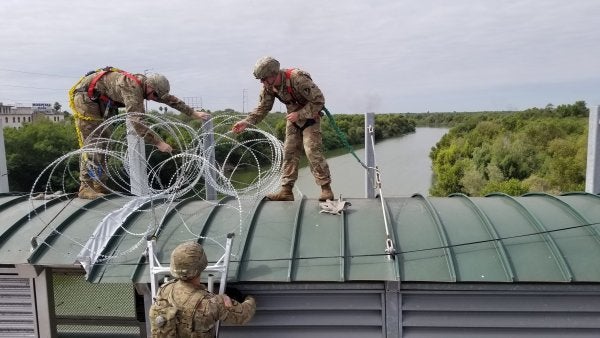 WASHINGTON — The Defense Department is deploying an additional 540 troops to the U.S. border with Mexico to keep migrants potentially infected with the novel coronavirus (COVID-19) from entering the country, the head of U.S. Northern Command said Wednesday.

The additional military forces were requested by the Department of Homeland Security to help “seal off” the U.S. border from migrants who may be carrying the virus, said Gen. Terrence O’Shaughnessy, head of U.S. Northern Command.

“We’re going to protect our nation from COVID-positive migrants,” said Lt. Gen. Laura Richardson, commander of U.S. Army North, which is a component of Northern Command and responsible for the Army’s homeland defense mission.

DHS has made multiple requests for additional military support along the border since 2018, leading to thousands of troops being sent to lay concertina wire, help with surveillance and provide logistical support to Border Patrol agents.

Border crossings, both legal and illegal, typically spike in the spring as migrants under seasonal labor visas and undocumented workers come to the United States for farm jobs.

Last month, the Trump administration ceased processing the farm labor visas from Mexico, but then eased those restrictions following input from the agriculture industry that a labor shortage would make it difficult for American farmers.

There are about 5,200 military personnel currently assigned to the border, said Pentagon spokesman Army Lt. Col. Christian Mitchell. They include about 2,700 active duty forces and 2,500 National Guard forces.

Details were not immediately available on where the additional forces would be assigned or what their duties would be at the border.

Since they were first deployed in 2018, the Defense Department has said military forces along the border would not be used to directly detain or interact with any migrants, but would assume supporting roles and enforce barriers. Under U.S. law, active duty U.S. forces cannot fill domestic law enforcement roles, such as detaining migrants.