Pentagon Asked To House 12,000 Immigrants In Effort To Keep Families Together

The U.S. Defense Department has been asked to provide shelter for as many as 12,000 undocumented immigrants and their children... 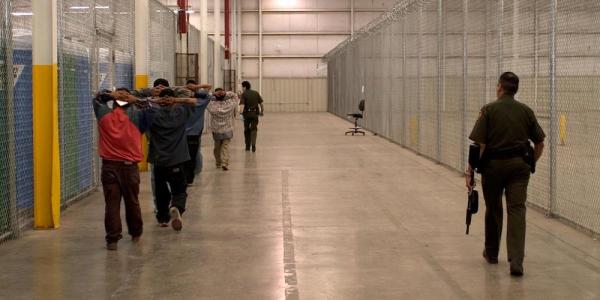 The U.S. Defense Department has been asked to provide shelter for as many as 12,000 undocumented immigrants and their children as part of an effort to keep families together, the Pentagon said late Wednesday.

The request came from the Department of Homeland Security, which asked the Pentagon to identify existing facilities or build “soft-sided facilities” to accommodate them, according to a department spokesman.

DHS has been carrying out President Donald Trump’s so-called zero tolerance policy of prosecuting people without visas who cross the U.S. border with Mexico. That led to many children being separated from their parents, sparking a national outcry that led Trump to reverse course and order that families be kept together.

“If facilities are not available, DoD has been asked to identify available DoD land and construct semi-separate, soft-sided camp facilities capable of sheltering up to 4,000 people, at three separate locations,” the Pentagon said in a statement, adding that “it prefers the facilities to be built in Texas, Arizona, New Mexico or California.”

DHS is asking the Defense Department to produce enough space to house 2,000 people within 45 days, according to the statement.

On Tuesday, a federal judge in San Diego ordered the U.S. to reunite immigrant children who had been separated from their families at border crossings and to stop detaining parents without their children. Trump demanded that Congress pass immigration legislation to address the problem.

On Wednesday, however, House Republicans fell far short in their second attempt to pass a GOP-only immigration bill.

U.S. District Judge Dana Sabraw said in his ruling Tuesday there was no dispute that the U.S. government wasn’t prepared to deal with the consequences of the zero-tolerance policy, which involved arresting all adults entering the U.S. illegally from Mexico and separating any children they had with them.

Sabraw, appointed to the federal bench in 2003 by President George W. Bush, gave the government two weeks to return children younger than 5 to their parents and 30 days for children 5 and older.

Even though Trump, after widespread condemnation, signed an executive order last week that reversed his policy of separating families seeking entry without a visa, the judge said a court order was needed because the directive included “subjective” standards for separating minors from their parents. The government has only stated it will reunite children with their families for removal from the country, the judge said.

The ruling applies to both families crossing into the U.S. illegally between checkpoints, and those who request asylum at border crossings. The deadlines might prove unrealistic for a government that has managed to reunite only a few of the more than 2,000 children that remain separated from their parents.