A 25th Infantry Division soldier and an Army medic whose dog tag was recovered are the first two Korean War... 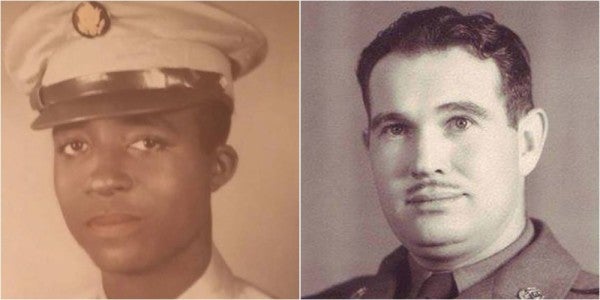 A 25th Infantry Division soldier and an Army medic whose dog tag was recovered are the first two Korean War identifications to be made from 55 sets of remains turned over to the United States by the North in July, officials said Thursday.

One of those soldiers, Pfc. William Hoover Jones, who was 19 when he died, was part of a segregated African-American unit within the Hawaii division that suffered the effects of racial prejudice — in addition to the equipment and training shortfalls that followed the Army as a whole into Korea.

President Donald Trump announced the identifications on Twitter, saying, “These heroes are home, they may rest in peace, and hopefully their families can have closure.”

All of the remains are being examined at the Defense POW/MIA Accounting Agency’s lab on Oahu.

On Nov. 26, 1950, he was reported missing in action in fighting against Chinese Communist Forces near Kujang, North Korea, during a fighting withdrawal, according to the accounting agency.

The U.S. Eighth Army, including the 24th Regiment, had advanced to within 60 miles of North Korea’s border with China when Chinese forces launched an overwhelming attack.

The regiment’s lineage originated with segregated units created after the Civil War, and it remained as such with black enlisted men and mostly white officers into the Korean War. The unit was inactivated in October 1951.

In a 1996 study of the 24th Regiment, Brig. Gen. John Mountcastle, then the Army’s chief of military history, said the Army and the nation “must be aware of the corrosive effects of segregation” which crippled mutual trust and “weakened the bonds that held the 24th together.”

Master Sgt. Charles McDaniel, 32, a medic with the 8th Cavalry Regiment Medical Company, also was identified. The unit was engaged with enemy forces of the Chinese People’s Volunteer Forces southwest of Unsan in North Korea, the accounting agency said. The Indiana man was reported missing in action on Nov. 2, 1950.

The sole military identification tag that North Korea provided with the 55 boxes of human remains belonged to McDaniel. The Army in August returned McDaniel’s corroded dog tag to his sons, Charles Jr. and Larry.

Charles, 71, told reporters at the time he was moved to tears when he got the phone call at home in Indianapolis informing him that his father’s dog tag had been returned.

The brothers were so young when their father was reported missing that they had little recollection of him.

“It’s a very mixed, jumbled moment for us,” Charles said. “At least we have this,” he said of the ID tag, imprinted with the name Charles Hobert McDaniel and a service number.

The retired Army chaplain and his brother are expected to attend an accounting agency’s commemoration of National POW/MIA Recognition Day at 10 a.m. today at the National Memorial Cemetery of the Pacific, also known as Punchbowl. They will participate in a rosette ceremony for their father after the ceremony.

The 55 sets of remains turned over by North Korea — which likely represent more individuals with some bones mismatched — came as a result of Trump’s historic June summit with North Korea leader Kim Jong Un.

Bones from the 55 sets are laid out on exam tables at the accounting agency’s Hickam lab, their degraded condition contrasting with the nearly complete skeletons from the Korean War that were buried as “unknowns” at Punchbowl and more recently exhumed for identification, a step made possible through advances in science.

The identification of Jones came quickly. For starters, he was tall — 6 feet, 1 inch or 6 feet, 2 inches — and he was African-American.

“There are far fewer African-Americans missing than white (personnel from the Korean War),” John Byrd, director of the accounting agency’s lab, said earlier this month.

“Then if you add height to the mix, he’s a lot taller than average,” Byrd said.

The average height for American soldiers missing from the Korean War was 5 feet, 9 inches. “Just those two things by themselves allowed us to narrow a list down very quickly,” Byrd said.

Comparisons of teeth to dental records and the use of past-service chest X-rays helped identify the remains. A DNA match was confirmed for Jones.

In addition to McDaniel’s dog tag, pieces of leather boots, mess kit items, canteens, a pitted steel helmet, buttons, the hilt of a Ka-Bar-like knife, and other items were returned by North Korea with the remains.