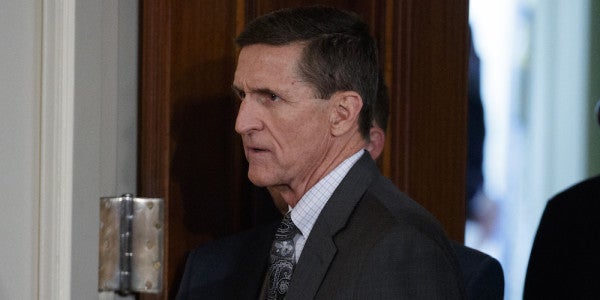 On Thursday, members of the House Committee on Oversight and Government Reform announced that the Department of Defense’s inspector general had launched an investigation into money the former national security adviser and retired Army lieutenant general received from foreign organizations, the Washington Post reports.

On April 11, acting DODIG Glenn Fine notified the House committee’s chairman, Utah Republican Rep. Jason Chaffetz, in writing that the Pentagon had initiated an investigation to determine “whether [Flynn] failed to obtain required approval prior to receiving any emolument from a foreign government.”

Flynn has now been subjected to investigations by the Pentagon IG, FBI, the Army, the House Intelligence Committee, and the House Committee on Oversight and Government Reform and “U.S. counterintelligence agents” we can only presume work for the CIA and NSA.

Flynn was fired from his position as national security adviser to President Donald Trump in February after revelations he misled the White House, including Vice President Mike Pence, about his pre-inauguration contacts with Russia’s ambassador to the U.S. His tenure as chief security adviser to the president was the shortest in modern political history.

The Pentagon investigation appears focused on the $45,000 Flynn received in 2015 to appear alongside Russian President Vladimir Putin at a Russia Today-sponsored gala, as well as his work as the he collected $530,000 between last August and November from Turkish government interests while working for Trump’s presidential campaign (his Turkish contract reportedly concluded on November 15, 2016, three days before he was named national security adviser). Flynn retroactively registered as a foreign lobbyist with the Department of Justice in March.

Flynn, through a lawyer, has vehemently rebuffed allegations of wrongdoing. “Notwithstanding his life of national service, the media are awash with unfounded allegations, outrageous claims of treason, and vicious innuendo directed against him,” Flynn’s lawyer said in March, as the former sought immunity in exchange for congressional testimony. (His request was denied.) “He is now the target of unsubstantiated public demands by Members of Congress and other political critics that he be criminally investigated.”

Well, with good reason! According to documents released by HOC’s ranking Democrat, Rep. Elijah Cummings of Maryland, was warned by Pentagon officials as early as October 2014 “not to take foreign government-sourced money without ‘advance approval’ from the Pentagon,” the Associated Press notes. Yet Flynn reportedly continued to take on foreign contracts without clearing his connections with the appropriate channels.

Cummings: Flynn was warned explicitly in 2014 not to accept foreign $ without permission; didn’t seek permission when he took Russian $ 2015 pic.twitter.com/wSqe4mMa9L

“These documents raise grave questions about why General Flynn concealed the payments he received from foreign sources after he was warned explicitly by the Pentagon,” Cummings said in a statement. “Our next step is to get the documents we are seeking from the White House so we can complete our investigation. I thank the Department of Defense for providing us with unclassified versions of these documents.”

The letter comes just days after both Chaffetz and Cummings announced that Flynn “may have broken the law” by receiving payments from foreign groups.

Let’s remember for a second that, during the Republican National Convention in Cleveland last July, Flynn made a big show out of grilling then-Democratic presidential candidate Hillary Clinton about her mishandling of classified information as Secretary of State. “Lock her up, that's right!” Flynn chanted along with the crowd. “Damn right, exactly right… And you know why we're saying that? We're saying that because, if I, a guy who knows this business, if I did a tenth of what she did, I would be in jail today.”

Karma’s a bitch, Mike — and according to these documents, you should have known better.