The Pentagon Isn’t Tracking How Many Military Families Go Hungry 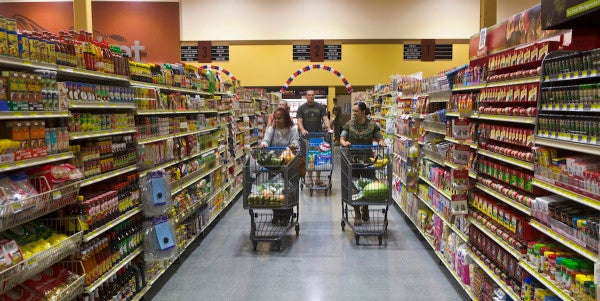 Defense Department officials have incomplete information on how many military families are using food assistance programs because the department doesn't completely track the data or work with other departments to do so, a new report from the Government Accountability Office finds.

While some data exist on how many service members use programs such as food stamps, known as SNAP, or the Women and Infant Children (WIC) program, which are both controlled by the Department of Agriculture, the Pentagon only loosely tracks the programs it administers, the report says. Additionally, no single office at the DoD is in charge of food assistance tracking, it says.

Little to no information was found by auditors on service members' use of the myriad of other food assistance programs such as local food banks and free and reduced lunches for children in non-DoD schools. That's a problem military officials must tackle before they are able to accurately understand how hunger impacts troops and their families, the report says.

“Without more complete survey data, DoD will not understand the prevalence of need among service members to effectively target its support,” it says.

The report found that about 23,000 active-duty service members received food stamps in 2013, according to U.S. Census data. Information from the Department of Defense Education Activity showed that in September 2015, 24 percent of 23,000 children in U.S. DoDEA schools were eligible for free meals, while 21 percent were eligible for reduced-price meals.

Whether a military family qualifies for food stamps depends strongly on where they are stationed, since individual states set some of their own income guidelines. For example, at both Camp Pendleton, California, and Fort Hood, Texas, troops need a minimum household size of six to qualify, even though income between those locations varies widely thanks to the Basic Allowance for Housing rates.

USDA officials said they do not track whether an applicant is the military, although they could easily do so, because it does not impact the family's eligibility.

“While it is known that service members use food assistance programs and that information on recipients can be obtained, specific data on service members' use of these programs are not available because there is no requirement or need that has been established for agencies such as the USDA to collect such information,” the report says.

The report was ordered as part of the 2016 National Defense Authorization Act (NDAA). That law also ordered that the USDA not block defense officials from receiving any existing data on how many service members use their programs. However, officials have not worked to get that data, the report says.

“While DOD could benefit from more complete information on service members' use of food assistance, none of the DOD officials we met were aware of any efforts by the department to coordinate with agencies, such as the USDA, to collect and share relevant data on food assistance,” it says.

Pentagon officials disagreed with that finding. Although the NDAA did require the information to be available, it did not require the USDA to actually release it, they said in an official response included in the report. And although they have tried to do so, they said, they are also are having trouble locating a point of contact within the USDA.

“We have tried for several years to receive … SNAP data from the U.S. Department of Agriculture,” Ronald Keohane, a DoD deputy assistant secretary of defense who oversees military family policy, wrote in the response. “However, the NDAA does not mandate that USDA provide the data.”