The Pentagon is compiling a list of Iraqi citizens who have worked with the U.S. military and recommending that they... 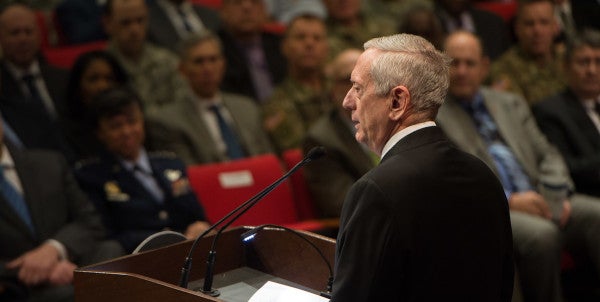 The Pentagon is compiling a list of Iraqi citizens who have worked with the U.S. military and recommending that they be exempt from President Donald Trump’s temporary ban on visitors from Iraq and six other predominantly Muslim countries, according to the U.S. military.

The move could potentially shield tens of thousands of Iraqi interpreters, advisers and others who have assisted the American military from the president’s controversial executive action that blocked visitors from Iraq, Iran, Syria, Sudan, Somalia, Libya and Yemen.

Capt. Jeff Davis, a Pentagon spokesman, told reporters Monday that the list will include names of individuals who have “demonstrated their commitment” to helping the United States.

Related: What Trump’s Travel Ban Means For Iraqi Interpreters Who Served Alongside US Troops »

“Even people that are doing seemingly benign things in support of us — whether as a linguist, a driver, anything else — they often do that at great personal risk,” he said. “So people who take these risks are really making a tangible signal of support to the United States and that’s something that will, and should be, recognized.”

The list would not require any changes to the president’s order, but rather serve as guidance to the Department of Homeland Security and the White House in implementing the new policy.

“We recognize that people have served this country, we should make sure that in those cases they're helped out,” he said. “But that doesn't mean that we just give them a pass.”

Trump, who signed the order at the Pentagon on Friday, did not consult Defense Secretary James N. Mattis or Gen. Joseph F. Dunford Jr. on the temporary suspensions of entry to visitors from the seven nations, according to U.S. officials.

The executive action put the U.S. military in a difficult position because it works closely with the Iraqi government on a range of issues, including the fight against the Islamic State, which necessitates travel between the two countries.

For instance, Iraqi military pilots train to fly F-16 fighter jets at Luke Air Force Base in Arizona. It’s not clear those pilots, who are active in the fight against the Islamic State, could arrive in the U.S. for the training.