The Pentagon plans to release a Saudi American dual citizen whom it accused of being a member of ISIS at... 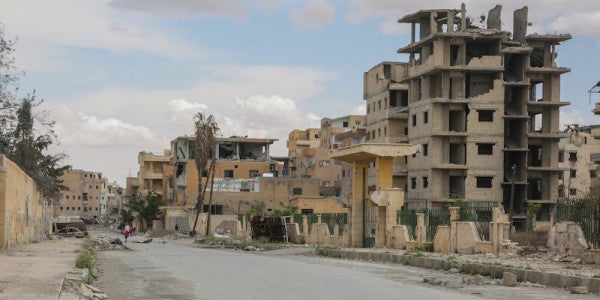 The Pentagon plans to release a Saudi American dual citizen whom it accused of being a member of ISIS at an undisclosed location in Syria, a move that his U.S. lawyers called “a death warrant.”

The American Civil Liberties Union, which represents the detainee, said it would ask a federal judge to order the government not to release him in Syria, which the group called “a disgraceful way to treat an American citizen.” A court hearing on the motion is scheduled for Friday morning in Washington.

The unnamed prisoner, identified as “John Doe” in legal documents, has been held in Iraq as an enemy combatant since September while a legal battle unfolded over whether the U.S. military had the right to hold him or send him to Saudi Arabia.

Late Wednesday, after months of legal setbacks, the Justice Department abruptly abandoned the case, saying in a court filing that the Pentagon would free the man as soon as Saturday near where he was captured.

The move came less than two weeks before a June 20 court hearing on whether congressional war authorizations passed more than 15 years ago to justify the use of troops in Afghanistan and Iraq allow the detention of enemy combatants in the conflict against Islamic State, an issue the administration may not want to see tested in court.

Related: The World Is Less Peaceful Now Than At Any Point In The Past Decade »

The detainee will be given $4,210 in cash — the same amount he had when he was captured — and a new cellphone, along with “food and water to last for several days,” Mark E. Mitchell, a Pentagon official, said in a federal court filing Thursday.

The Pentagon told the detainee’s attorneys that he would not be given a U.S. passport.

“The government has effectively admitted that it has no reason to continue detaining our client and that he does not pose a threat,” said ACLU attorney Jonathan Hafetz. “But, instead of offering a safe release, they want to dump an American citizen onto the side of the road in a war-torn country without any assurances of protection and no identification.

“What the government is offering our client is no release — it’s a death warrant,” Hafetz said in a statement, adding that “our fight for our client’s right to due process has also become a fight for his right to life.”

Mitchell said that the Defense Department “has taken all necessary and feasible precautions to ensure the safe release of the prisoner.”

The Pentagon also disclosed that it had listened in on 18 telephone conversations between the man and his ACLU attorneys as part of “routine security monitoring of DOD telecommunications systems” — calling it an “inadvertent breach” of attorney-client confidentiality that it “regrets.”

When an analyst listening to portions of the conversations realized they were privileged, officials purged the recordings from a database and transferred them to a compact disc, which it plans to destroy, the Pentagon said.

Justice Department lawyers said in a two-page court filing that releasing the man in Syria was “consistent with the traditional military practice” by U.S. Central Command, which oversees military operations in the Middle East, and “with the Department’s obligation under the law of war.”

The Pentagon offered the prisoner the choice of being in an unspecified Syrian town in or outside a refugee camp there.

The prisoner “did not identify a preference between the two locations and would not agree to the release” under those conditions, the Justice Department noted, adding that the Pentagon had decided to discharge him in the town “no sooner than 72 hours hence.”

That means he could be freed as soon as Saturday evening, unless a federal judge blocks the plan.

Since the man is likely to encounter checkpoints after he is released, the Pentagon plans to notify Kurdish fighters in the area that he is being released and that the U.S. is “no longer seeking or requesting” that he be detained.

A previous Pentagon plan to turn the man over to Saudi Arabia was halted in April by U.S. District Judge Tanya S. Chutkan, who issued a preliminary injunction barring the Pentagon from transferring him from its custody.

Related: Trump Wants US Troops Out Of Syria. The Pentagon Really Can’t Say When That’ll Happen »

The Pentagon gained custody of the detainee after he surrendered in September to a Syrian Kurdish militia backed by the United States and was delivered to the U.S. military. The military declared him an enemy combatant and put him in a military prison in Iraq.

The man said that he went to Syria in early 2015 to report on the militants as a freelance journalist and then was kidnapped by them.

Prosecutors have alleged that “by his own admission,” the man joined Islamic State in 2014, attended a training camp, “and worked for and provided support to” the group until the U.S.-led military offensive in Iraq and Syria forced him to flee.

When he was captured, he was “carrying a thumb drive … filled with files explaining how to make bombs, how to use different types of weapons, and how to interrogate captives,” as well as over $4,000 in cash and a GPS device,” an FBI agent said in the document unsealed in February.

He was also listed as a “fighter” in an internal Islamic State document, the document said.

Despite such claims, prosecutors have not charged the detainee with a crime.

He talked to U.S. intelligence officers after he was taken into custody, but that evidence can’t be used in court against him. After federal agents read him his Miranda rights last year, he asked to be provided with a defense lawyer and has not been questioned since.