Pentagon To Relieve Debt Of Most California National Guardsmen 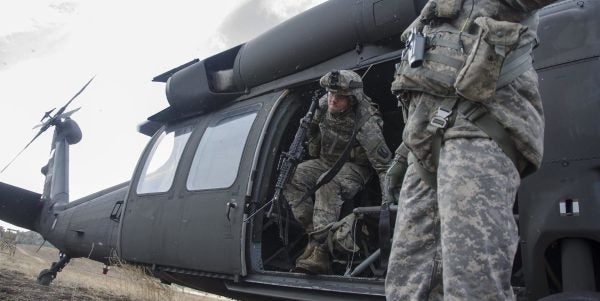 Defense Department officials told lawmakers Wednesday they hope to forgive about 90 percent of cases involving thousands of California National Guard members that auditors say received improper bonuses during the height of the wars in Iraq and Afghanistan.

“It is my hope that by the end of the year, we will have something between 1,000 and 2,000 cases total out of the universe of 17,000 that are subject to review,” Peter Levine, undersecretary of Defense for Personnel and Readiness, told members of the House Armed Services Committee.

Levine was among Pentagon and Army National Guard officials who testified at the Dec. 7 hearing to tell lawmakers how the Pentagon plans to resolve what some are calling a betrayal of the troops by next summer and prevent similar incidents from occurring in the future.

“Compensation, whether it is a bonus for a service agreement or regular pay, is an obligation to our service members and their families that they should not have to worry about,” said Rep. Joseph Heck, a Republican from Nevada and chairman of the panel's Military Personnel Subcommittee.

“I find it unacceptable that we would place the additional burden of years of concern about the legitimacy of a bonus payment or a student loan repayment on those who volunteer to serve,” he added.

Lawmakers have come up with a compromise as part of the National Defense Authorization Act that calls on the Pentagon to forgive the enlistment bonuses and student loan benefits unless the soldier who received the money “knew or reasonably should have known” that he or she was ineligible for it.

The Los Angeles Times/Tribune Washington Bureau reported last month that the Pentagon was demanding repayment of enlistment bonuses given to California Guard soldiers to help fill enlistment quotas for the wars. Many of the soldiers served in combat, and some returned with severe injuries.

Many of soldiers were told to repay bonuses of $15,000 or more years after they had completed their military service. Student loan repayments, which were also given out improperly to soldiers with educational loans, sometimes totaled as much as $50,000.

“Many reasons these cases are particularly troublesome,” Levine said. “Many of them are based on a technical deficiency.

“Particularly in cases like this, where we have a service member who made a commitment on the basis of a bonus and served out that commitment, so when we come in later after someone has fulfilled their commitment and then question on a technical ground why they received a bonus in the first place — that is a particular hardship,” he said.

There are two basic categories of cases, Levine said. One type involves about 1,400 cases already ordered to pay back bonuses. The second category of 16,000 cases involves soldiers who were put under suspicion or threat of recoupment of bonuses they received.

As for the larger category of about 16,000 cases, “We have greater discretion because we haven't yet established the debt yet,” Levine said.

Several “rules of thumb” will be established in an attempt to:

— Screen out cases that are more than 10 years old.

— Screen out most of the cases that involve enlisted members and lower ranking members without prior service on the basis that it's unlikely they would be able to understand their contract fully without assistance.

“As we go through those screens from that second universe of 16,000 or so cases, I expect to reduce that by about 90 percent, so we get down to about 10 percent,” Levine said. “We will then put that universe through the kinds of substantive screens, and I hope to get that down further.

“The objective is to find that easy ones first, get rid of those, tell people 'we are not pursuing you … we are telling you, you are off the hook; we are done with you,' so we can focus our resources on the cases that are the most significant.”

Many lawmakers said they felt the California Guard scandal severely damaged the trust of current Guard members across the country.

“In some of these cases, there have been troops — through no fault of their own — that are suffering the consequences,” said Rep. Paul Cook, a Republican from California. “It's our fault, and I use that word collectively on behalf of all officers that are in positions of authority. We betrayed the trust of the troops, and there is no excuse for that.”

Rep. Susan Davis, a Democrat from the state, said it's “critically important that we do not forget service members and their families that have been deeply affected by this.”

“Once these families have encountered financial hardships, we know it can be truly difficult to recover. Even if we return their bonus, we have already upended their lives by creating unnecessary emotional stress and financial instability.”

But National Guard officials told lawmakers that many others were held accountable, including leaders who failed to provide proper oversight, said Maj. Gen. David S. Baldwin, adjutant general for the California National Guard.

The Department of Justice prosecuted 44 soldiers. Of those, 26 were found guilty and convicted, Baldwin said. Another 15 cases are pending, and the remainder were either dismissed or acquitted, Baldwin said.

Lt. Gen. Timothy Kadavy, director of the Army National Guard, told lawmakers that the National Guard Bureau has taken steps to prevent this from happening again.

In 2010, the bureau conducted a review of all incentive programs across all states territories and the District of Columbia and found “no systemic fraud,” Kadavy said.

In 2012, the National Guard stood up the Guard Incentive Management System, or GIMS, which now provides “a centralized oversight program for bonus and incentive payments,” he said.

In 2016, the Army Audit Agency conducted an “external review” of GIMS and validated its effectiveness, Kadavy said. Auditors found that the system “substantially improved the controls of eligibility monitoring and payment phases of the incentive process.”

Despite the steps being taken to resolve the problem, officials admitted that they should have known about this a lot sooner.