The U.S. military is watching coronavirus infection trends in Chicago, Michigan, Florida and Louisiana with concern as it weighs where else it may need to deploy. 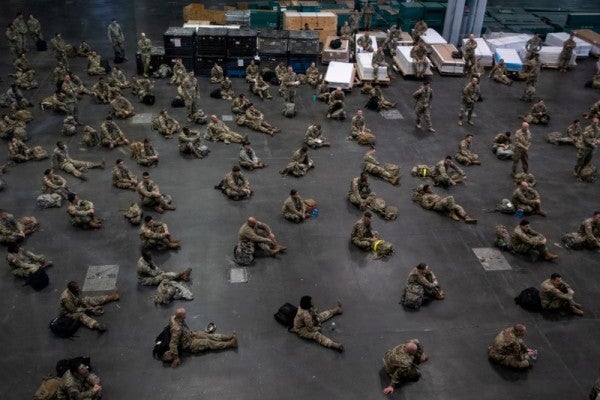 (Reuters) – The U.S. military is watching coronavirus infection trends in Chicago, Michigan, Florida and Louisiana with concern as it weighs where else it may need to deploy, after boosting aid to New York, California and Washington, a top general said on Friday.

Air Force General John Hyten, vice chairman of the Joint Chiefs of Staff, said the military was doing its own analysis as well as looking at data on infections compiled elsewhere in the government.

“There's a certain number of places where we have concerns and they're: Chicago, Michigan, Florida, Louisiana,” Hyten told a group of reporters, when asked where field hospitals could head next.

“Those are the areas that we're looking at and trying to figure out where to go next.”

Confirmed coronavirus cases in the United States reached 100,040 on Friday, the highest number in the world, a Reuters tally showed.

The Army Corps of Engineers said on Friday it was aiming to provide facilities for 3,000 people with the coronavirus at Chicago's McCormick Place convention center by April 24 for about $75 million.

Lieutenant General Todd Semonite, the Corps' commander, said the Corps was looking at potentially converting 114 facilities in the United States into hospitals.

Asked about Hyten's remarks, Semonite said he continued to be concerned about Michigan, Florida and Louisiana and had spoken with the governor of Louisiana. He said there could be a high demand for medical resources in Florida because of the aging population and added the Corps was developing options for the state.

The military is already deploying field hospitals to Seattle and New York. A Navy hospital ship arrived on Friday in Los Angeles and another one is expected to reach New York City on Monday, where Hyten said the city was still dredging the harbor to allow the massive ship to dock.

Each ship has a capacity of about 1,000 beds and would not treat coronavirus patients, instead taking pressure off overwhelmed civilian hospitals.

But Hyten cautioned that the U.S. military only had limited medical capacity in the United States and, at some point, it would have to tap the reserve forces — while guarding against drawing medical staff away from civilian facilities.

President Donald Trump on Friday signed an executive order authorizing the Pentagon and Department of Homeland Security to call up reservists.

“We made a decision about five or six years ago that we would downsize our military (health care) capabilities in the United States … to only really focus on our deployed requirements,” Hyten said.

He estimated that the military only had 1,329 adult hospital beds staffed at any one time in the United States.

“We're digging into the active duty force really heavily,” he said. “So the next thing that we're going to need is to look into the reserves.”