Pentagon To Beijing On South China Sea Militarization: Go Ahead, Make Our Day

The U.S. issued a stark warning to Beijing on Thursday, as Chinese militarization of the South China Sea creates a... 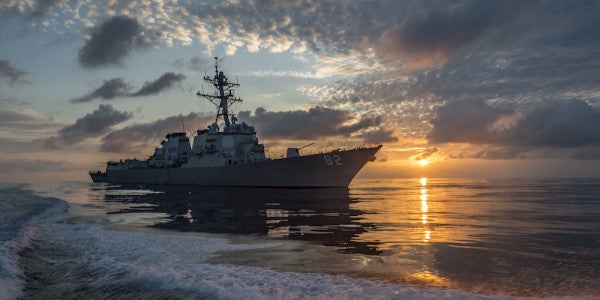 The U.S. issued a stark warning to Beijing on Thursday, as Chinese militarization of the South China Sea creates a potential flashpoint in a longstanding battle for control of the Pacific.

For years, Beijing has dredged the South China Sea to build artificial islands in waters it claims as its territory.

Six of China's neighbors also lay claim to conflicting patches of the South China Sea. The body of water is home to natural resources, and trillions of dollars' worth of trade passes through every year.

In 2016, an international court ruled that China's claims to the precious waterway were illegal, but Beijing made a show of ignoring that ruling.

It upped the ante this year by breaking a promise not to militarize the islands with missile deployments and with landing nuclear-capable bombers on the islands.

On Thursday, the U.S. reminded China of a “historical fact.” Lt. Gen. Kenneth McKenzie, the director of the Joint Staff, said “the United States military has had a lot of experience in the Western Pacific, taking down small islands.”

“We have a lot of experience, in the Second World War, taking down small islands that are isolated,” McKenzie said. “So that's a — that's a core competency of the US military that we've done before. You shouldn't read anything more into that than a simple statement of historical fact.”

The US has been the main challenger to China's maritime claims and in doing so has provoked the bulk of Beijing's rage, which is often expressed in a kind of doublespeak common for the Chinese Communist Party.

On Thursday, China's foreign ministry called U.S. claims that Beijing was militarizing the islands “ridiculous” and compared them to “a case of a thief crying 'stop thief' to cover their misdeeds.”

But on the same day, the Chinese state media detailed plans to prepare a military response to U.S. interference.

The Global Times, a newspaper controlled by the Communist Party, wrote: “Aside from deploying defensive weapons on the Spratly Islands, China should build a powerful deterrence system, including an aerial base and a roving naval force and base.”

“How can anyone argue with a straight face?” Bonnie Glaser, the director of the China Power Project at the Center for Strategic and International Studies, told Business Insider. “How can anyone say this is not militarization? It's a patent lie.” She said the ranges and functions of missiles China placed on the islands pointed to a clear military utility.

The White House has addressed this kind of speak from China's Communist party before, calling it “Orwellian nonsense.”

War is here, if you want it

Beijing's militarization of the South China Sea isn't just a potential threat to the region. Beijing is already using hard power to force out other countries and assert its dominance.

Most recently, on May 11 a Philippine navy ship was harassed by two Chinese vessels while trying to resupply Filipino marines in the disputed waters. A helicopter reportedly got dangerously close to the small, rubber Filipino ship and chased it off.

The Philippines are a longtime U.S. ally. The U.S. has massive military bases there and a duty to protect it.

Glaser said this was the first time the actual Chinese navy had announced involving itself in a patrol of the waters, marking an escalation of conflicts.

“The other night, the president said if his troops are harmed, that could be his red line,” President Rodrigo Duterte's national security adviser said of the South China Sea.

It's unclear whether Duterte would enforce that red line, but the legal case and practical need for military conflict in the South China Sea are there.

The U.S. reminding China that it can destroy its islands there could be a sign of things to come as the Chinese Communist Party increasingly tries to flex its muscles against freedom of navigation.