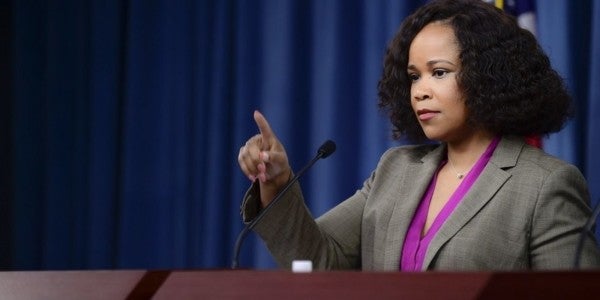 “I appreciate the opportunity afforded to me by this administration to serve alongside Secretary Mattis, our Service members and all the civilians who support them,” White tweeted Monday. “It has been my honor and privilege. Stay safe and God bless.”

Her announcement comes on the last days of both Defense Secretary Jim Mattis and Brett McGurk, the special envoy in the fight against ISIS.

White joined the Department of Defense after serving at the Renault-Nissan Alliance in France, with the Armed Services Committee of the U.S. Senate and at the Heritage Foundation.

She previously faced allegations of misconduct after being accused of forcing her subordinates to run personal errands for her, including to the dry cleaners and the pharmacy, CNN reported in August.

Charlie Summers, a former Maine senator and current deputy assistant to the secretary of Defense for public affairs, will be promoted into White's position beginning Tuesday.

White announced her departure hours after Mattis, her boss, issued his final farewell to the Defense Department.

“Our Department's leadership, civilian and military remains in the best possible hands. I am confident that each of you remains undistracted from our sworn mission to support and defend the Constitution while protecting our way of life,” he wrote.

“Our Department is proven to be at its best when the times are most difficult. So keep the faith in our country and hold fast, alongside our allies, aligned against our foes.”

McGurk also left the State Department Monday after speeding up a planned February exit after the president's Syria decision.

“I wish my former civilian and military colleagues well as they work under extremely difficult circumstances to protect the interests of our great country,” he tweeted Monday. “It was a privilege to serve alongside them.”