The U.S. military successfully conducted a flight test of a glide body for future hypersonic weapons, the Department of Defense announced Friday morning. 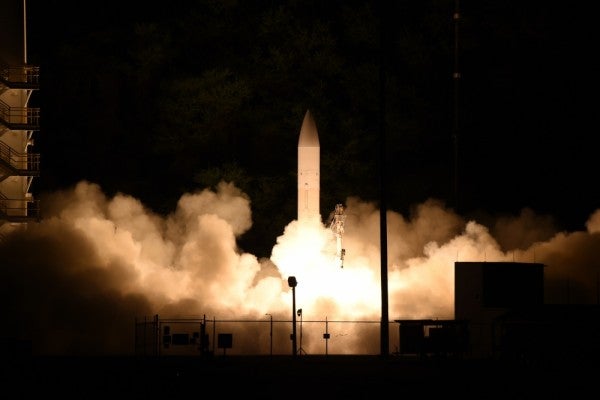 The U.S. military successfully conducted a flight test of a glide body for future hypersonic weapons, the Department of Defense announced Friday morning.

The Army and the Navy, which are jointly developing a common hypersonic glide body (C-HGB) for future weapons systems, carried out a test launch at the Pacific Missile Range Facility in Kauai, Hawaii, late on Thursday local time, with the Missile Defense Agency monitoring the experiment and gathering data to inform defense developments.

The C-HGB “flew at hypersonic speed to a designated impact point,” DoD said, adding that “this event is a major milestone towards the department's goal of fielding hypersonic warfighting capabilities in the early- to mid-2020s.”

A glide body is the part of a hypersonic weapon that carries the warhead. Launched using a conventional rocket booster, the glide body eventually separates. After separation, the weapon is no longer able to accelerate, but it is able to maneuver to evade defenses and deliver a warhead to target.

While hypersonic weapons have the ability to fly at speeds of at least Mach 5, five times the speed of sound, it is their maneuverability that makes them particularly dangerous to anyone on the receiving end, as modern missile-defense systems are not designed to counter this type of threat.

Hypersonic weapons provide “the warfighter with an ability to strike targets hundreds and even thousands of miles away, in a matter of minutes, to defeat a wide range of high-value targets,” DoD explained.

The latest milestone C-HGB test built on the results of a flight experiment conducted in October 2017.

“Today we validated our design and are now ready to move to the next phase towards fielding a hypersonic strike capability,” said Vice Adm. Johnny R. Wolfe, the director of Navy's Strategic Systems Programs.

The Army intends to field a ground-launched hypersonic weapon in 2023, with the Navy fielding a ship-launched variant the same year, Defense News reports. A submarine-launched version is expected in 2024.