The senior Pentagon official in charge of the war court has upheld a judge’s contempt conviction of the Marine general... 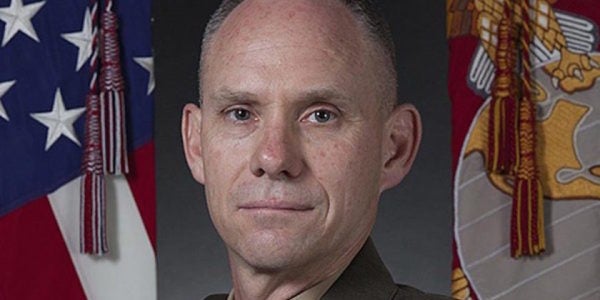 The senior Pentagon official in charge of the war court has upheld a judge’s contempt conviction of the Marine general overseeing defense teams, according to a statement issued Tuesday that suggested three civilian defense attorneys are still bound to litigate in the USS Cole case at Guantanamo.

The official, Harvey Rishikof, however, decided that Marine Brig. Gen. John Baker need not serve the remainder of a 21-day sentence of confinement or pay a $1,000 fine. USS Cole case judge Air Force Col. Vance Spath sentenced Baker to both on Nov. 2 for invoking a privilege and refusing to answer the judge’s questions at the war court.

Instead, Rishikof, whose title is convening authority of military commissions, will forward the conviction to Baker’s chain of command as an administrative and ethics matter.

In the short term that could keep the issue out of federal court. When Baker was confined to his trailer park quarters behind the courthouse, U.S. District Court Judge Royce Lamberth considered a habeas corpus petition brought by civilian lawyers for Baker, who called the general’s detention unlawful. Before Lamberth could rule, Rishikof suspended the general’s punishment after about 48 hours.

Rishikof, whose title is the Convening Authority for Military Commissions, appears to recognize an ongoing, clandestine crisis in confidence in the ability of defense attorneys to hold confidential conversations with accused terrorists at the prison complex — the reason why USS Cole criminal defense attorney Rick Kammen, an experienced death penalty lawyer, and colleagues Rosa Eliades and Mary Spears asked Baker to permit them to resign in the first place. All three were paid by the Pentagon.

The statement issued by the Pentagon on Tuesday said Rishikof “will also recommend to the Joint Detention Group at Guantanamo Bay that a ‘clean’ facility be designated or constructed which would provide continued assurances and confidence that attorney-client meeting spaces are not subject to monitoring, as the commission proceeds.”

In the past, lawyers have discovered listening devices in meeting rooms disguised as smoke detectors; a prosecutor said soldiers mistakenly overheard legal meetings, and then something classified happened over the summer to cause Baker to caution defense teams that no meeting site at the base guarantees fundamental attorney-client confidentiality.

The statement said Rishikof would be asking the commander of the guard force at Guantanamo’s prison of 41 captives to create a space for attorney-client meetings. In specifically seeking that be done by the Joint Detention Group commander, Army Col. Steve Gabavics, the Pentagon statement signaled that Rishikof was bypassing the senior commander of the prison, Rear Adm. Edward Cashman.

Gabavics answers directly to the prison commander, independent of the prison’s intelligence, legal and combat camera units, which answer to Cashman via a chief of staff of equal rank to Gabavics.

According to the Pentagon statement, Rishikof said that Spath did have the authority to overrule Baker’s release of the attorneys, and referred to their “attempted resignation,” suggesting that as far as the top Pentagon official is concerned, Kammen, Eliades and Spears are still attorneys of record on the case.

Kammen said by email Wednesday morning that “our position is that General Baker excused us. So our resignations were approved by the only official with a vote. The convening authority has no legitimate role in this decision.”

He added that, under the rules for the war court, the role of the convening authority is not that of “a super judge until there is a conviction. He does not have a legitimate role in the conflict between Colonel Spath and General Baker over excusal authority. Indeed his attempt to insert himself into it may be unlawful influence.”