Pentagon ‘will do everything we can’ to honor impeachment subpoena, Esper says

Defense Secretary Mark Esper said Sunday he and the Pentagon will comply with House Democrats' impeachment inquiry subpoena, but it'll be on their own schedule 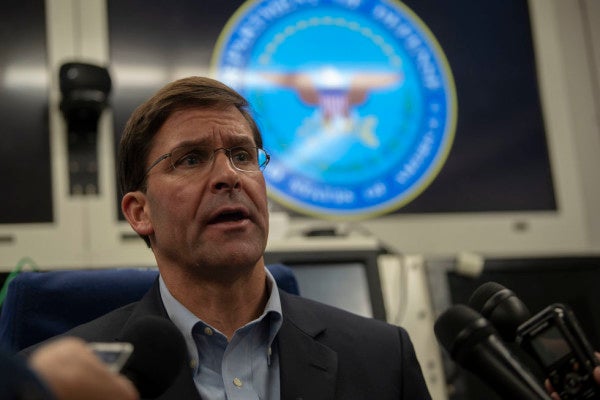 Defense Secretary Mark Esper said Sunday he and the Pentagon will comply with House Democrats' impeachment inquiry subpoena, but it'll be on their own schedule.

“We will do everything we can to cooperate with the Congress,” Esper said on CBS' “Face the Nation.” “Just in the last week or two, my general counsel sent out a note — as we typically do in these situations — to ensure documents are retained.”

The House Intelligence Committee subpoenaed Esper last week as part of the impeachment inquiry, requesting Pentagon documents related to the delay of hundreds of millions of dollars in congressionally approved military funds to Ukraine.

Esper is paying less attention to the subpoena's Oct. 15 deadline.

“I don't know the status of what that document preparation is, what restrictions we may have internally with regard to releasing them, the White House has a say on the release of documents as well,” he said on “Fox News Sunday.”

Esper's assurances come less than a week after the White House insisted it will not cooperate with the House Democrats' impeachment inquiry into President Trump, claiming the probe “violates fundamental fairness and constitutionally mandated due process.”

“Your highly partisan and unconstitutional effort threatens grave and lasting damage to our democratic institutions, to our system of free elections, and to the American people,” White House counsel Pat Cipollone wrote in a letter last week.