Clay Luthy’s bad knees have been operated on five times over the years, and they kept him from re-enlisting in... 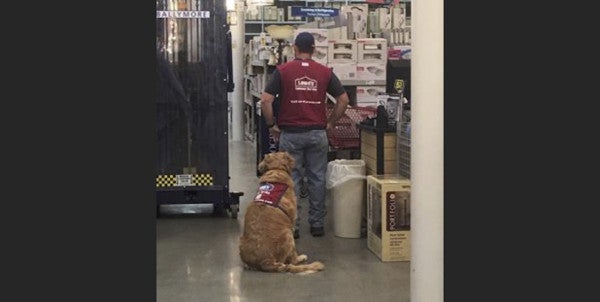 Clay Luthy’s bad knees have been operated on five times over the years, and they kept him from re-enlisting in the Air Force. He can’t bend his left one, and he has to go easy on his right.

But that’s why he has Charlotte, a 10-year-old golden retriever who also happens to be his co-worker at a Lowe’s store in Abilene.

The Abilene Reporter-News profiled Luthy and his service dog last month, but the duo turned famous over the weekend, when a Lowe’s shopper posted a Facebook photo of them standing together in the store.

By Monday night, the picture had been shared more than 125,000 times.

It showed what appeared to be a typical day at work for Luthy and Charlotte, who wears a miniature Lowe’s apron.

The service dog is trained to help Luthy to his feet if he falls down, according to the Reporter-News.

The 35-year-old was a C-130 loadmaster in the Air Force, but his knee problems forced him out of the service. When he applied to Lowe’s, he also put in an application for Charlotte, according to the Reporter-News.

The store approved her, and now she’s part of the crew, tagging along Luthy as he helps customers.

“Everybody loves Charlotte,” Luthy told the newspaper. “This definitely was not part of the job description.”

©2016 the Fort Worth Star-Telegram. Distributed by Tribune Content Agency, LLC.