Democratic presidential hopeful Pete Buttigieg is proposing a "veteran-centric" Department of Veterans Affairs that will honor the service of the men and women of the military who represent "the best of who we are and what we can be." 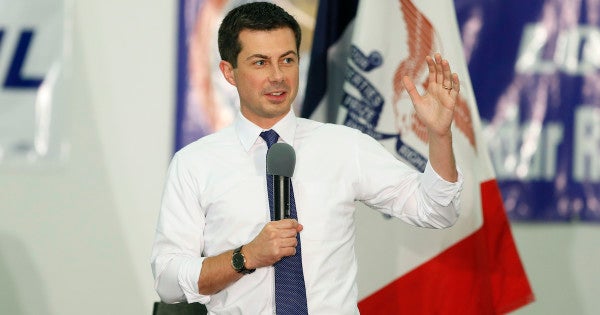 CEDAR RAPIDS, Iowa — On Veterans Day, Democratic presidential hopeful Pete Buttigieg is proposing a “veteran-centric” Department of Veterans Affairs that will honor the service of the men and women of the military who represent “the best of who we are and what we can be.”

Buttigieg, who served as a Navy intelligence officer in Afghanistan, said service members are united by a “shared commitment to support and defend the United States” and in doing so they set an example “for us and the world, about the potential of the American experiment.”

“But while not everyone can serve in the military, we can all follow their example of service,” Buttigieg said. “Let us honor the sacrifice of those serving, and those who served before, by joining hands with them and finding ways for each of us to give back to our communities and serve our nation.”

Buttigieg, the mayor of South Bend, Ind., has said he was inspired to serve, in part, by the veterans he met while knocking doors in Iowa for Barack Obama during the 2008 campaign.

He has released a three-part plan that calls for healing the wounds of war — visible and invisible — and other service-related injuries by creating a better VA focused on the kinds of comprehensive care that veterans need.

“Serving in uniform can be the defining experience of a lifetime — but it can also lead to challenges that last a lifetime,” Buttigieg said. “During my time in Afghanistan, I served beside Americans from all walks of life who were willing to risk their lives to promote security and peace.

“When I returned home, like so many others, I felt disoriented,” he said. “Too many veterans like those I have served with have suffered from post-traumatic stress and, tragically, some have died by suicide.”

Buttigieg's plan also calls for supporting 1 percent of Americans who keep the other 99 percent safe, including members of the immigrant and LGBTQ communities as well as their children and spouses.

The third part of his plan is to more than just say “thanks for your service,” Buttigieg said. He wants to enlist entire communities to help restore the normalcy and sense of community veterans need by individually and collectively making sure they know they belong, and give them the tools to thrive.

His plan calls for caring for veterans of all eras, ending veteran homelessness and making sure the VA hospital system is equipped to meet the needs of female veterans.

For more on Buttigieg's plans for veterans, visit www.peteforamerica.com.