"Fox & Friends" weekend co-host Pete Hegseth has been working behind the scenes to convince President Donald Trump to pardon U.S. service members accused or convicted of war crimes, according to a recent report in the Daily Beast 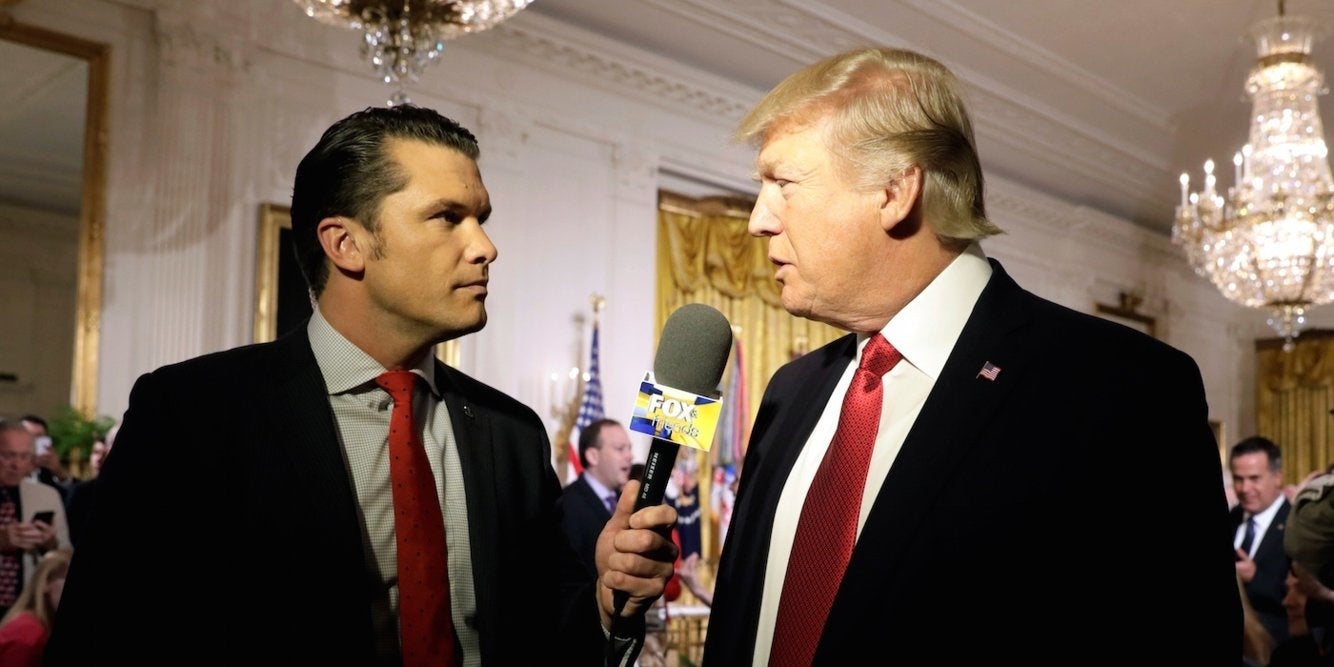 “Fox & Friends” weekend co-host Pete Hegseth has been working behind the scenes to convince President Donald Trump to pardon U.S. service members accused or convicted of war crimes, according to a recent report in the Daily Beast.

The Times said that Trump has filed requests with the Department of Justice to issue a presidential pardon to Navy SEAL Special Operations Chief and platoon leader Edward Gallagher, who is set to be court-martialed on charges on war crimes next week.

Gallagher, who was reported to the military authorities by his fellow SEALs, is accused of killing multiple innocent civilians, including a teenage girl and an elderly man, and fatally stabbing a captured 15-year-old ISIS fighter during a 2017 deployment to Iraq.

Both Hegseth and GOP Reps. Duncan Hunter of California, a Marine Corps veteran, and Matt Gaetz of Florida have taken up Gallagher’s case on Fox News and by writing formal congressional letters arguing that Gallagher is scapegoated and being treated unfairly by the military justice system.

Earlier this year, Trump has periodically tweeted out messages of support for Gallagher, including an announcement that Gallagher — who allegedly threatened those who spoke to authorities — would be held in “less restrictive confinement” while he awaits trial.

In May, Trump pardoned former Army 1st Lt. Michael Behenna, who was convicted in a military trial of killing an Iraqi prisoner in 2008. Behenna had argued he was acting in self-defense.

Hegseth has also encouraged Trump to consider pardoning Army Green Beret Mathew Golsteyn, accused of killing an unarmed suspected Taliban bomb maker in Afghanistan in 2010, and Army Lieutenant Clint Lorance, convicted in 2013 on charges of ordering his subordinates to kill two unarmed Afghanis, and sentenced to 19 years in prison.

According to the Times, Trump is also considering pardoning Nicholas Slatten, a former employee of defense contracting firm Blackwater, who was convicted in 2018 of opening fire on a group of Iraqi civilians in 2007.

Despite the push to pardon Gallagher and other veterans accused or convicted of war crimes, former military officials have warned that the pardons devalue the service of veterans who followed the law, and further puts troops at risk.

“Absent evidence of innocence or injustice, the wholesale pardon of U.S. service members accused of war crimes signals our troops and allies that we don’t take the Law of Armed Conflict seriously,” wrote retired Gen. Martin Dempsey, who served as the chairman of the Joint Chiefs of Staff, in a Tuesday tweet, further calling it a “bad precedent” and “bad message” to send.

Hegseth’s seemingly successful private lobbying of Trump to issue such high-profile pardons is the latest manifestation of Trump’s cozy relationship with Fox News. Trump has also been reported to consult opinion host Sean Hannity and Fox Business host Lou Dobbs for their advice and input.

While Hegseth did not respond to the Daily Beast’s requests for comment, he appeared to confirm their reporting by tweeting a link to the story with the hashtags #FreeEddie #FreeMatt and #FreeClint.

SEE ALSO: Why I Think Lt Clint Lorance Is A Murderer