ELYRIA, Ohio — A petition is circling online to name the next unguided missile destroyer after the Elyria sailor who... 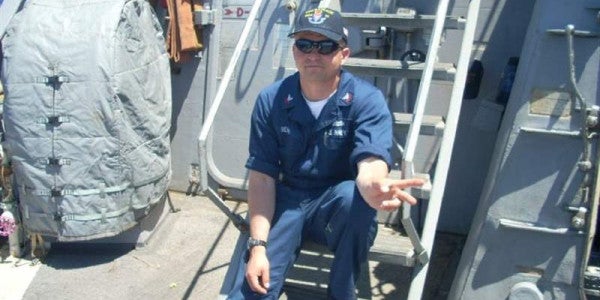 ELYRIA, Ohio — A petition is circling online to name the next unguided missile destroyer after the Elyria sailor who lost his life in the crash of the U.S.S. Fitzgerald to save others.

The petition, which has garnered more than 12,000 supporters on change.org, says Gary Rehm Jr. “epitomized the guiding principle of Ship, Shipmate, Self by making the ultimate sacrifice in order to save 20 shipmates and attempting to save 6 more.”

The Fitzgerald, collided with a merchant vessel about 2:30 a.m. June 17 off the coast of Japan. Rehm, a 37-year-old Fire Controlman First Class, went into a flooded compartment to save sailors who were trapped, WKYC reports.

Rehm's uncle, Stanley Rehm, told the news station that from what he understands they closed the hatch because the ship was taking on water.

CNN reports the ships collided on Fitzgerald's starboard side, next to the berthing area where sailors sleep.

The berthing compartment collapsed inward, making it difficult for survivors to get out, it reports.

More than 100 crew members were asleep when water poured into two berthing rooms, the New York Times reports. The radio room was damaged and communications gear was destroyed or left without power.

Stanley told the Daily Beast that Rehm called his shipmates his kids. He “leapt into action” to save his kids, Rehm's uncle said.

Adm. Brian Fort, veteran warship commander, is leading the Navy's investigation of the collision, the New York Times reported. The U.S. Coast Guard, the Japanese coast guard and the insurer of the shipping vessel that collided with the Fitzgerald have also launched investigations, according to the Times.

Rehm lived in Virginia with his wife, Erin.

He grew up in Elyria and graduated from Oberlin High School. He enlisted in the Navy in 1998.

Rehm was eligible to retire in three months, according to family members.