Meet The New Head Of The New ‘Indo-Pacific Command’

At a Pearl Harbor ceremony Wednesday, Defense Secretary James Mattis welcomed an admiral who took charge of a command with... 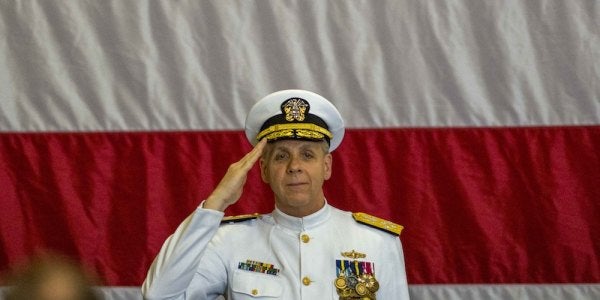 At a Pearl Harbor ceremony Wednesday, Defense Secretary James Mattis welcomed an admiral who took charge of a command with a new name and growing mission.

He replaces Adm. Harry B. Harris, who retires after four decades in the Navy to become the new American ambassador to South Korea during turbulent talks over a potential powwow with the dictatorship in neighboring North Korea.

Davidson commanded the Sixth Fleet in Europe and Africa and helmed Fleet Forces Command before he was appointed to replace Harris.

Davidson’s latest appointment arrived in the wake of a string of surface warship collisions in the Pacific Ocean last year that claimed the lives of 17 sailors.

In his brief speech, Mattis, a retired four-star Marine general, signaled his guidance to Davidson by urging him to begin “reforming any command practices that detract from performance and lethality.”

“During your confirmation hearing you expressed your commitment to ‘devote the whole of your energy to ensuring (this) command is the most lethal and combat-ready force in our history,’” Mattis said. “America and countries across the broad Indo-Pacific region are counting on you to do just that.

“I have every confidence in your ability to carry out your duties with the grit, wisdom and skill you have shown throughout your career.”

The Navy meted out justice to Scott Swift, the four-star commander of the Pacific Fleet who was in line to take the Indo-Pacific Command post but had to retire early. So did Naval Surface Forces boss Vice Adm. Tom Rowden. But Davidson emerged unscathed.

A key function of Davidson’s Fleet Forces Command was making sure fleets were ready and properly staffed for operating at sea, predominately in the Atlantic Ocean but with a global reach.

Relieved as commander of the Japan-based Seventh Fleet, Vice Adm. Joseph Aucoin took aim at Davidson’s command in an April essay in the U.S. Naval Institute’s “Proceedings,” charging it with failing to address both staffing levels aboard ships and “excessive tasking” of the fleets on exercises and other high-demand missions.

Davidson led a “Fleet Comprehensive Review” into the causes of the collisions, focusing mostly on sailors and their commanders stationed in forward-deployed Asian waters, where the accidents occurred.

In his change of command address, Davidson didn’t touch on those controversies and instead turned to strategic challenges in the Indo-Pacific theater — China, Russia, North Korea, Iran and violent extremists such as the Islamic State.

“To our allies here in the Indo-Pacific, you will have no better ally,” Davidson said. “To our partners, I look forward to advancing our partnership in a way that serves our mutual interests. To our friends, our friendship is rock solid. We must continue to work together. Peace and prosperity in the Indo Pacific relies directly on these bonds.

Saying that the era of great power competition had begun again, 27 years after the fall of the Soviet Union, Harris warned that the United States was approaching “an inflection point in history,” in which “freedom and justice hang in the balance.”

At his back was the memorial to the USS Arizona, the battleship sunk by Japanese aircraft on Dec. 7, 1941, triggering a global war that changed the balance of power in the Pacific to America.

Davidson’s comments came after the Pentagon booted China from joining a major international training exercise involving American forces and President Donald J. Trump continues to wrangle with Beijing over a threatened $60 billion in economic sanctions, part of a broader effort to negotiate a bilateral trade agreement.

Related: The US Has Pissed Off Iran, China And North Korea This Week — And It’s Only Thursday »

Twenty-six nations, 47 surface ships, five submarines, 18 national land forces and more than 200 aircraft and 25,000 personnel will participate in the biennial Rim of the Pacific exercise slated to begin on June 27 in the waters off Hawaii and Southern California, according to Point Loma-based Third Fleet commanders.

The world’s largest international maritime war games, Rim of the Pacific is designed to foster relationships between small and large powers, especially those in the Pacific Rim.

As signs of America’s growing interest in the Indian Ocean and enduring concerns about the rise of Beijing, both Sri Lanka and China’s neighbor, Vietnam, are attending the event for the first time.

Also underscoring the emphasis on the new Indo-Pacific direction, Mattis left the ceremony to immediately jet to Singapore, a day after closed-door talks with the defense ministers of Japan and Indonesia.

He’s slated to conduct similar discussions with top leaders from India and Singapore in the coming days before and during the Shangri-La Dialogue, a major security summit of Pacific powers, that runs through the week.