Editor's Note: This article by James Barber originally appeared on Military.com, the premier source of information for the military and veteran community.... 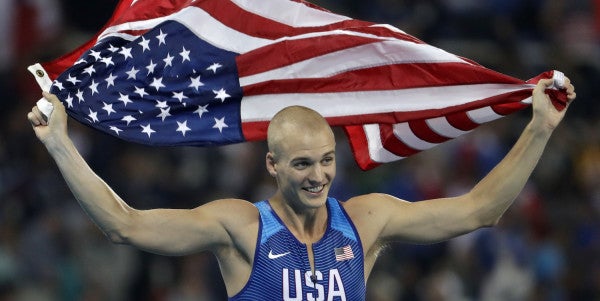 Editor's Note: This article by James Barber originally appeared on Military.com, the premier source of information for the military and veteran community.

It also marked the first pole vault medal for the United States in a dozen years — since since Tim Mack and Toby Stevenson went 1-2 at the Athens 2004 Olympic Games.

Army Secretary Eric Fanning, who will be part of the U.S. Presidential Delegation attending the closing ceremonies on Sunday, took to Twitter to congratulate Kendricks on the achievement.

Kendricks, who led the competition after the qualifying rounds, finished behind Brazil's Thiago Silva and France's Renaud Lavillenie.

Silva won gold with an Olympic record of 19 feet 8 inches with the boisterous support of Brazilian fans. They were so rowdy that silver medalist, world record holder and defending Olympic champion Lavillenie complained about the crowd booing him on his final jump. “There is no respect. There is no fair play. It's the Olympics. So if we have no respect in the Olympics, where can we get respect?”

Kendricks, who graduated from the University of Mississippi in 2014 and is the five-time U.S. champion, previously represented Team USA at the 2012 London Olympics.

While Kendricks is the first U.S. military athlete to medal at the Rio Games, American service members were shut out in the shooting competitions after finishing behind competitors from such countries as Russia and China. The five soldiers and one Marine competed Aug. 8-14 in 50-meter rifle, 10-meter air rifle, 25-meter pistol, and double trap shotgun events in the 2016 Rio Olympic Games.

But there are still opportunities left for U.S. military members to medal in the 2016 Olympic Games.