A new analysis of a decade of records across 651 Georgia police departments and sheriff’s offices found departments that took more than $1,000 in 1033 money, on average, fatally shot about four times as many people as those that didn’t 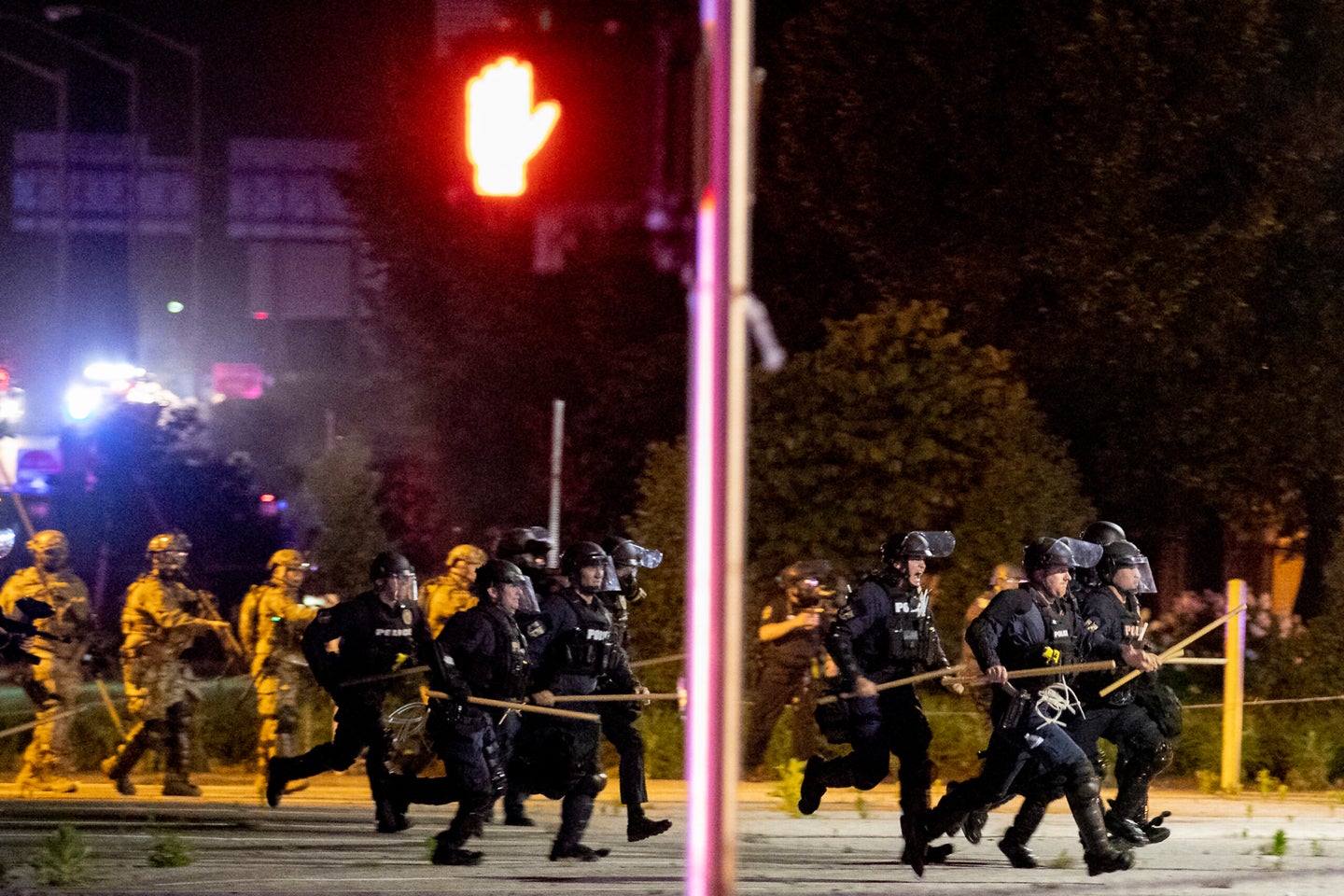 Americans have seen it time and again in recent months on the nightly news: Protesters in the streets confronted by local police officers carrying assault rifles, some atop armored vehicles, looking more like soldiers than public servants.

Much of that equipment has trickled down to police departments from a controversial Defense Department initiative known as the 1033 program, a 30-year-old federal initiative that provides a way for the military to dispose of surplus equipment by sending it to local police.

The impact on policing has been huge. In Georgia alone, police departments and sheriff’s offices have received more than 2,700 military rifles, night vision goggles and laser gun sights, and literally hundreds of armored vehicles, including more than two dozen mine-resistant vehicles built to fight the war on terror abroad.

To get the military equipment, police departments pay only for the shipping costs. But that does not mean the program comes without other costs.

A new AJC analysis of a decade of records across 651 Georgia police departments and sheriff’s offices found departments that took more than $1,000 in 1033 money, on average, fatally shot about four times as many people as those that didn’t. The newspaper’s analysis used the military’s database and paired it with a database of fatal police shootings from across the state, controlling for statistical variables like community income, rural-urban differences, racial makeup, and violent crime rates.

The results paint a troubling picture: The more equipment a department receives, the more people are shot and killed, even after accounting for violent crime, race, income, drug use and population.

Only 7% of Georgia’s law enforcement agencies received surplus military gear at any time over the 10 years, but those agencies accounted for 17% of the 261 people shot and killed by police.

The statistical correlation doesn’t prove that 1033 gear in a police department causes more fatal police shootings, or that those shootings were unjustified, only that there is a strong relationship between the two. The analysis also doesn’t suggest that every department in the 1033 program displays a strong relationship between the number of people killed and the amount of 1033 funding accepted.

Wayne McElrath, senior investigative advisor for the Washington-based Project on Government Oversight, said more violent confrontations with police track with a change in how police departments view their role.

“The cost that we are dealing with now is a highly militarized police force that is no longer looking like police but (is) looking like they are patrolling a hostile foreign nation,” he said.

Social science research suggests militarization also impacts how citizens view police — both positively and negatively, depending on who was asked.

McElrath, who has both law enforcement and military experience, has been critical of the 1033 program going back to his days directing investigations for the Government Accountability Office, an independent congressional watchdog agency. He said government initiatives like the 1033 program have encouraged police departments and the public to think of police as fighting a war rather than their traditional role of ensuring public safety.

“They are changing the culture,” he said. “But we are beginning to accept that it is the norm.”

A subtle impact to police culture

The AJC analysis looked at departments across the state and measured the number of fatal police shootings in years following the receipt of military gear. Atlanta Police Department spokesman Sgt. John Chafee questioned if anyone could link a department’s use of the program to police shootings.

The statistical correlation found by the AJC doesn’t link a helicopter transmission with a fatal police shooting. Instead, the analysis measured the relationship between shootings and participation in the 1033 program across the state. That measurement found that civilian deaths rose when military gear was present.

While these numbers are small, they are for a single department in a single year and become scores of fatalities over the full dataset.

The AJC analysis is patterned after several large-scale statistical studies tracing surplus military equipment and fatal police shootings. One of the most well-known was done in 2018 by Edward Lawson, a political science lecturer at the University of South Carolina and a data consultant with the South Carolina Department of Health and Human Services.

Lawson’s research, published in the academic journal Political Research Quarterly, looked at two years of data across the entire nation. Like the AJC study, Lawson found higher instances of police killings in departments that received 1033 equipment than in those that did not.

In an interview with the AJC, Lawson said the relationship between departments that take 1033 equipment and violence is subtle, reflecting an outlook by police department leadership that trickles down to the officers.

Lawson’s research and the AJC’s own analysis suggest an indirect relationship or a statistical clue that links police militarization and civilian deaths.

“Drawing a direct connection from equipment to killings doesn’t make sense, in part because most officers never get to use any of that stuff anyway,” Lawson said. “But if the agency as a whole is more psychologically militarized, that agency will pursue more military equipment and will also kill more civilians.”

From foreign battlefields to US cities

Increased concern over police-involved shootings across the nation has placed more focus on police militarization and the 1033 program.

The program grew out of America’s long wars in Afghanistan and Iraq, which created a massive surplus in used military equipment. The Defense Department found a ready customer in local police whose budgets would otherwise put items like armored vehicles out of reach. As of this summer, about 8,200 local and state agencies in 49 states were actively enrolled in the program.

Police departments can’t get everything from the military. For instance, tanks and large, crew-operated guns are off-limits, as are actual military uniforms and body armor. Other items, like assault rifles and night-vision gear, are considered long-term “loans” to local agencies, but officially remain federal government property.

More than $7.4 billion in surplus equipment has been distributed since the program began in 1990.

From 2009 to 2018, police departments in Georgia received $43.5 million in firearms, vehicles, and other gear from the military, a figure that experts believe is deeply discounted because the material is used. All that equipment has been requested despite the fact that violent crime rates in Georgia have dropped by one third over that period, according to FBI crime statistics.

And while violent crime in the state has dropped, new research indicates departments that participate in the 1033 program cannot take the credit. A newly published article by a group of scholars with the Emory University Department of Political Science found no relationship between the presence of surplus military equipment and lower crime rates.

Tom Clark, one of the Emory professors behind the study, said the fact that the gear isn’t reducing crime amplifies the downsides to police militarization.

“When they are wearing all of this equipment and they have been given these bigger rifles and training in these armored vehicles, it just has to change their mindset,” he said.

The expected number of killings for a single department in a single year increases as the area policed by the department becomes more violent.

While the number of people killed by police increases as violent crime in the area increases, police departments in equally dangerous neighborhoods kill different numbers of people depending on how much 1033 gear they acquired the year before.

Clark said he is working with police in Fairfax, Va., to get funding for an experiment testing how police and the public react to different uniforms as a more precise way to measure the impact. “The police themselves believe that the way they are presenting themselves changes the nature of their interactions,” he said.

DeKalb County Police Chief Mirtha Ramos doesn’t buy into the idea that the gear police officers wear or use makes them more of a threat to the public.

“Just because we carry guns and wear a vest, it doesn’t mean we’re out to create violence,” said Ramos, who was hired to lead the metro department a year ago. “Our focus is just having the best trained best equipped and best-trained officers.”

Yet the DeKalb County Police has made very little use of the 1033 program over the years, compared to other metro departments. And Ramos said they have done away with camouflage uniforms worn by some units.

“We want to make sure we are not mistaken for anything that what we are,” she said. “We are listening to the concerns of the community.”

‘I don’t want my officers to look like soldiers’

Police leaders often justify their participation in the 1033 program as financially prudent, though experts such as McElrath say departments often overlook the hidden cost of training officers on specialized equipment and maintaining it.

For its size, Pyle’s department in Gordon County has tapped the Defense Department for a lot of military gear over the years. The transfers from the federal program include 10 M16 and 20 M14 rifles, as well as night vision gear and an armored Humvee. The department has also gotten less lethal gear — such as a laser printer and a half-dozen ladders — from the military.

But Pyle, who took over as police chief two years ago, said there are limits to what he thinks is appropriate for a city police department. For example, he mothballed the department’s M14s, locking them up in the evidence closet when he couldn’t get the Defense Department to take them back.

The M14 fires a high-caliber round. It’s powerful and has a long range. “It’s too much gun to be on the city streets,” Pyle said.

Likewise, Pyle said he turned down the offer of a $750,000 armored vehicle, despite the fact that there are dozens of them in departments around the state.

“It was basically a tank with wheels, I said, ‘Absolutely not. We do not want that thing rolling down the streets of Calhoun,’” he said. “In my humble opinion, it’s more trouble than it’s worth.”

Pyle said he thinks military-style gear and clothing can have an impact on a department. Along with shelving the M14s, Pyle said he ordered officers to wear traditional police uniforms, instead of the navy blue combat fatigues they had worn in the city for more than a decade.

“That’s not something I ever cared for,” he said. “I have the utmost respect for soldiers but I don’t want my officers to look like soldiers. We are police officers; we are here to serve and protect.”

Pyle’s department continues to get military equipment through the program. Much of the gear is used for non-military applications. For example, the night-vision gear is used when a search for a missing person drags into the night, he said.

But the city also gets more deadly items. Last year, the city’s take included 120 30-round magazines for its M16s. The guns can fire in three-shot bursts or single fire, and his officers are trained on them.

“I don’t want to mislead you that it isn’t a military-grade weapon,” he said, “because it is.”