Vietnam veteran Mike Pomeroy thought his Purple Heart was gone forever after burglars took it when he evacuated his home... 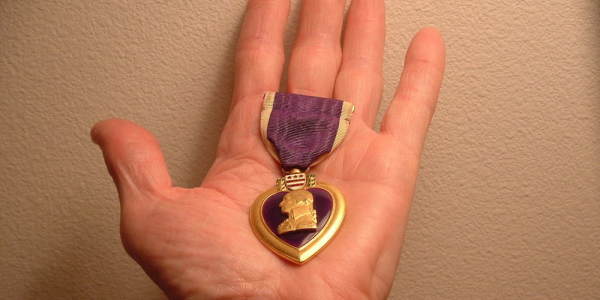 Vietnam veteran Mike Pomeroy thought his Purple Heart was gone forever after burglars took it when he evacuated his home last week due to the emergency at Oroville Dam.

On Sunday, Yuba City police found and returned his medals. They also arrested two women and a man in connection with the burglary.

Pomeroy, 69, earned the Purple Heart when a mortar struck while he loaded wounded onto a ship in Vietnam, sending shrapnel into his arm. He had kept the Purple Heart locked in his closet for decades. Most of his family didn’t even know it was there, but he had planned to pass it on to his grandsons.

Pomeroy and his wife Gaylene, 64, fled their home on Feb. 12 along with 188,000 other residents of Sutter, Yuba and Butte counties when officials feared Oroville Dam’s emergency spillway might fail, sending a wall of water crashing over the Highway 70 corridor.

Looters apparently swept in after the communities were evacuated, giving them easy access to homes. Law enforcement officials are not classifying what followed as a wave of looting, because they define looting as stealing large numbers of goods from a single place, such as a store. But a Yuba County sheriff’s official said last week that there was a noticeable uptick in burglaries during the day-and-a-half evacuation period, and Butte County Sheriff Kory Honea said there were some cases being labeled as looting.

Those who were given moments to leave their homes often left behind credit cards, cash and other valuables. The Pomeroys focused on getting their medicines and the items they would need for a stay away from home, Gaylene Pomeroy said last week.

“We packed our bags and got all of our medicines, and we locked up the house,” she said.

The couple went to stay with family in Benicia but later asked their son, who was in Yuba City, to check on their house while he was in town.

“The back gate was open and the front door was wide open, so he called the police right away,” she said. “They came and searched the house and it was pretty much thrashed. They had thrashed everything.”

The jewelry and heirlooms were returned Sunday along with the Purple Heart, Mike Pomeroy said.

Yuba City police announced the arrests of three people in connection with the case in a Facebook post on Sunday but gave few other details, including the names of those arrested. A police spokesperson was unavailable for comment Monday morning.