Rex Tillerson is out as secretary of state and will be replaced by CIA Director Mike Pompeo, President Donald Trump... 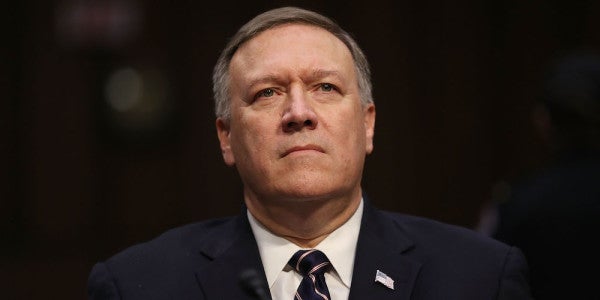 Rex Tillerson is out as secretary of state and will be replaced by CIA Director Mike Pompeo, President Donald Trump announced on Twitter Tuesday morning.

Pompeo will be replaced at the CIA by his deputy, Gina Haspel. She would become the first woman to run the agency.

According to the Washington Post, Trump last Friday asked Tillerson to step aside, leading him to shorten his trip to Africa and return to Washington on Monday.

“I am proud to nominate the Director of the Central Intelligence Agency, Mike Pompeo, to be our new Secretary of State,” Trump said in a statement to the Post. “Mike graduated first in his class at West Point, served with distinction in the U.S. Army, and graduated with Honors from Harvard Law School. He went on to serve in the U.S. House of Representatives with a proven record of working across the aisle.”

Trump also lauded Tillerson, with whom he has long clashed with, and wished him and his family well.

The president also told reporters Tuesday that he made the decision to oust Tillerson “by myself” and added that Tillerson will be “much happier now.”

Here are seven things to know about Pompeo:

He was born in California.

He is married to wife Susan of Wichita, Kansas. The pair have one son, Nick, and two dogs.

He is a graduate of West Point and Harvard Law School.

Pompeo attended West Point and served as a cavalry officer in the Army from 1986 to 1991.

After graduating from Harvard Law School, where Pompeo became editor of the Harvard Law Review, he ran two businesses in Kansas.

Pompeo was elected as congressman in Kansas’ 4th district in 2010 and served for three terms before heading the CIA.

According to U.S. News & World Report, Pompeo’s 2010 campaign was backed by the political arm of Koch Industries, an energy conglomerate based in Wichita, Kansas (Pompeo's district).

In 1998, Pompeo and other West Point alumni helped found Thayer Aerospace, which he ran with investment funds from Koch Industries. He sold the company in 2006 and became president of Sentry International, an oilfield equipment company.

He is a Tea Party representative known for having fiscally and socially conservative stances on a variety of issues.

Considered a Trump loyalist, Pompeo has in the past played down the extent of Russian interference in the 2016 presidential election, but is known to be more hawkish on Russian President Vladimir Putin than Trump.

Pompeo was also highly critical of the Obama administration and its nuclear deal with Iran. He also opposed the Affordable Care Act, shutting down the prison at Guantanamo Bay and accused former secretary of state Hillary Clinton of intentionally misleading Americans about the nature of the attack while serving on the House Select Benghazi Committee.

Following the deadly 2013 Boston marathon bombing, Pompeo was accused of Islamophobia for suggesting some Islamic faith leaders may be encouraging terrorist attacks, according to the BBC.

“When the most devastating terrorist attacks on America in the last 20 years come overwhelmingly from people of a single faith and are performed in the name of that faith a special obligation falls on those that are the leaders of that faith,” he said. “Instead of responding, silence has made these Islamic leaders across America potentially complicit in these acts and, more importantly still, in those that may well follow.”

He was nominated by Trump for CIA director in November 2016.

Trump’s pick for CIA director made headlines in 2016 because Pompeo, who has long been known for his conservative ideologies, would be filling a non-partisan role as CIA director.

There were already rumors that Pompeo would eventually replace Tillerson as secretary of state.

In November 2017, the New York Times reported that Tillerson, who had a rocky relationship with Trump, was on the way out. And Pompeo would be the likely replacement.

Tillerson dismissed the notion as “laughable” as Pompeo remained silent.