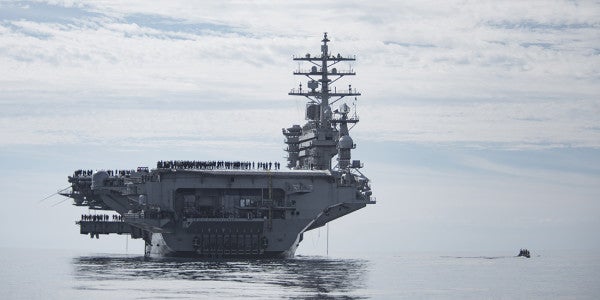 Davis said the cause of the contamination is under investigation and the carrier was closed to all but mission essential personnel. Potable water for fountains, restroom sinks and dining facilities on the carrier, which is at the shipyard for routine maintenance, was shut off.

“Water coolers are being put in place for all personnel on the ship and pier,” Davis said.

Water is provided to the carrier along the pier through a riser, Davis said, and the Ike is not currently producing its own water like it would while underway. Results from additional water samples taken at the pier are expected Friday, Davis said. Water testing at buildings located near the Ike around the same time were negative for contaminants.

“When they're in port, they're on shore services and one of those services is water,” Davis said.

The Ike left Naval Station Norfolk in August and entered the shipyard for what the Navy has previously said would be a six-month upgrade to the ship's mechanical and electrical systems. Information about the carrier's delay in the shipyard was not immediately Thursday evening.