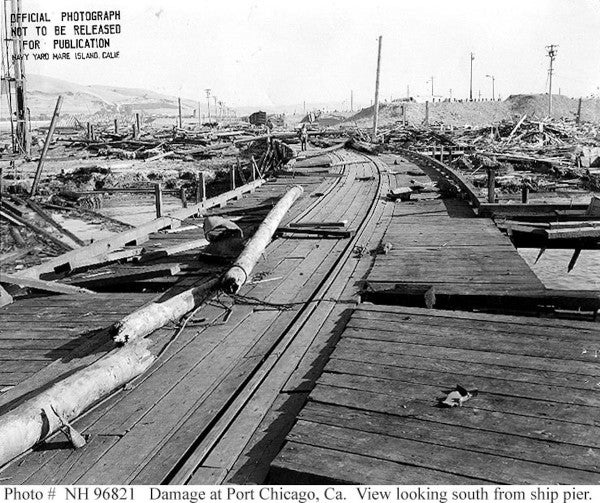 CONCORD, Calif. — In tandem with the approaching 75th anniversary of the Port Chicago explosion — the deadliest home-front disaster of World War II — an California congressman has added an amendment to a federal bill that would exonerate 50 survivors of the accident who were convicted of mutiny for refusing to return to work in unsafe conditions.

The amendment by East Bay Congressman Mark DeSaulnier, D-Concord, calls on the Secretary of the U.S. Navy to publicly exonerate the “Port Chicago 50” — the group of African-American sailors who refused to go back to the Concord Naval Weapons Station to load and unload dangerous munitions without proper safety training. The amendment was inserted into the National Defense Authorization Act, which passed the House of Representatives by a vote of 220-to-197.

“I cannot think of a more fitting tribute on the seventy-fifth anniversary of the Port Chicago disaster than to finally honor the Port Chicago 50 with exoneration,” DeSaulnier said in a written statement. “For far too long the names of these brave men have been tarnished by our history of racial discrimination, but today we are righting a wrong and giving the Port Chicago 50 the respect they deserved so many years ago.”

In 1944, African Americans in the Navy worked in segregated units and often had to load and unload ships. The men at the Port Chicago Naval Magazine did not get information or training and thought they were handling inactive munitions, according to Friends of Port Chicago National Memorial. In fact, they were loading bombs with warheads.

On July 17, 1944, crews at the Concord Naval Weapons Station were loading two naval vessels with active munitions when the explosives ignited in a series of blasts, killing 320 men — 202 of whom were African American — and injuring 400.

When survivors of the blast were sent to a nearby base to continue the work, many refused to do so without safety training and more support. In response, the Navy charged, convicted and imprisoned 50 of them for “conspiring to make mutiny.” After the war, they were released, granted clemency, allowed to complete their military service and given honorable discharges. But only one was ever pardoned, according to Friends of Port Chicago.

The Rev. Diana McDaniel, president of The Friends of Port Chicago National Memorial, called the amendment “an historic and welcome step.” His coalition of veterans and representatives of religious, civil rights and political groups pushed for exoneration of the 50 men.

DeSaulnier had included a provision in a previous National Defense Authorization Act that required the Navy to investigate the treatment of sailors at Port Chicago.

Some have taken issue with that and previous efforts to exonerate the Port Chicago 50, including several readers who wrote to this news organization in 2016. Service members everywhere faced unsafe, dangerous conditions back then, they argued.

But supporters of exoneration see the Port Chicago situation differently, especially because the African-American sailors weren't given any training or safety lessons.

The disaster and subsequent protest by the sailors has been credited with helping pave the way for desegregation of the Navy, which began to integrate its regiments in June 1945 and formally desegregated in 1948. It also helped usher in proper training and guidelines for safer handling of munitions.

While many people had hoped President Barack Obama would exonerate the sailors, he left office without doing so.

“The 50 African American sailors at Port Chicago, who boldly stood against discrimination and refused to return to unsafe work conditions, should be remembered as heroes,” Rep. Barbara Lee, D-Oakland, said in a written statement. “The charges of mutiny levied against these service members was wrong. These brave men should be honored, not only for their pivotal role in the World War II home front effort but also for their courage in the face of injustice.”

DeSaulnier had urged the Smithsonian to include the Port Chicago 50 in the new National Museum of African American History and Culture.

The East Bay Regional Park District meanwhile is working with the National Park Service to create a visitor center that would commemorate the Port Chicago explosion on the former naval weapons station site, which is being turned into a new regional park and thousands of acres of housing, commercial centers, a college campus, schools and public services.

DeSaulnier also included a measure in the defense act to help veterans who learned too late that their disability benefits can be reduced or withheld by the government until the full amount of their separation pay is recouped. The amendment would require a study of how many veterans are impacted by that and how much money has been withheld from them. Other amendments in this year's act include one offered by Rep. Jackie Speier codifying non-discrimination protections in the military and ending the ban on transgender military service, and another by Rep. Mark Pocan (D-Wisc.) that would make it easier for those discharged under “Don't Ask, Don't Tell” to upgrade their discharge characterization.

The defense act still needs to be approved by the U.S. Senate.

WATCH NEXT: Word War II Newsreels Are Just The Best