Defense Secretary Mark Esper has made the Trump administration aware of his concerns with the appropriation of the U.S. military's uniforms by law enforcement agencies as they face off with protesters in cities like Portland, Oregon 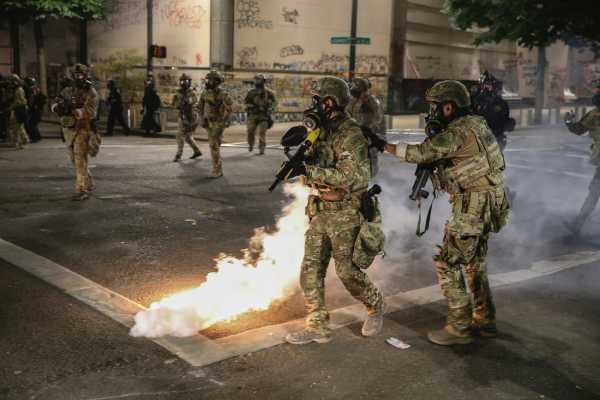 Defense Secretary Mark Esper has made the Trump administration aware of his concerns with the appropriation of the US military's uniforms by law enforcement agencies as they face off with protesters in cities like Portland, Oregon, a Pentagon spokesman said Tuesday afternoon.

“We saw this take place back in June, when there were some law enforcement that wore uniforms that make them appear military,” Defense Department spokesman Jonathan Hoffman said to reporters, referencing the George Floyd protests throughout the country earlier this year.

“The secretary has a expressed a concern of this within the administration, that we want a system where people can tell the difference,” he added.

The confusion became apparent after video footage and pictures showed law enforcement officials, many of whom refused to identify themselves or the agency they were working for, wearing the U.S. Army's camouflage uniform as they confronted demonstrators.

This confusion has been compounded after other activists, such as the Boogaloo movement, wore pieces of the same uniform or carried with them military-style gear to the same protests throughout the country.

Members of this group were sent to Portland to quell the protests, which went on for over 50 days and were linked to the defacement of federal buildings, according to the CBP. BORTAC's actions at the protests were scrutinized after video footage revealed its agents detaining a suspected anarchist and whisking them away in an unmarked minivan. The incident prompted lawmakers to demand an investigation.

US Army Gen. Mark Milley, the chairman of the Joint Chiefs of Staff, previously highlighted his concerns about the optics of law enforcement officials dressing like military service members while responding to protests, saying there needs to be clear “visual distinction” between the two organizations.

“You want a clear definition between that which is military and that which is police, in my view,” Milley said during a congressional hearing on July 9. “Because when you start introducing the military, you're talking about a different level of effort there.”