"I think we're gonna look back and say this year was a big milestone for women in service for pregnancy." 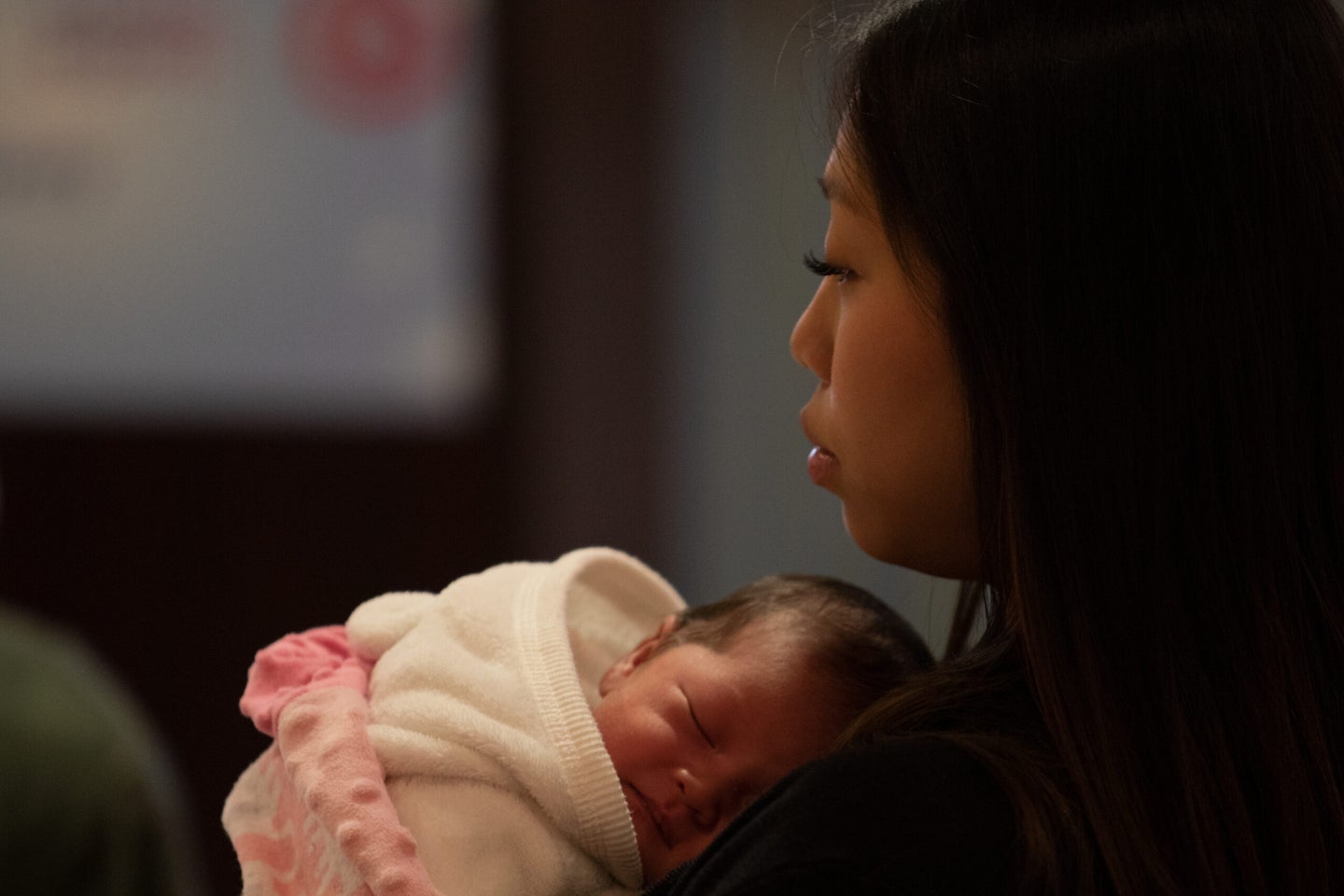 Complaints from an active-duty airman's colleague landed the airman in front of her command leadership.

She was taking too many breaks while on duty, they said, and they recommended that she fix the problem on her own.

But the breaks she took were to pump milk for her newborn baby.

“It was a constant battle,” said the officer, who gave birth to her second child two years ago. She asked not to be identified for fear of reprisal, but said she works in health care at a Texas base.

Her coworkers began accusing her of “taking advantage of pumping time to avoid assignments or putting my own needs ahead of my patients,” she said in a recent interview with Military.com. “None of that was true.”

The Air Force has a policy allowing new moms time to pump every three to four hours for 15 to 30 minutes at a time, once they're back on duty. The officer was spacing her breaks at least five or six hours apart during a 12-hour shift, but still faced scrutiny and a lack of support from her colleagues, she said.

“Nothing was ever done,” to rectify her poor treatment, she said. “Overall, we need more support for moms postpartum returning to work.”

Her situation underscores the challenges and backlash women still face when they have babies while in the military. Some end up leaving service because they don't find their duty compatible with having a family, and others have been passed over for promotion just because they took time to have a baby, according to experts who spoke with Military.com.

But now, new initiatives in planning could require training to root out unconscious bias surrounding motherhood in the military and support postpartum mothers, including removing barriers that limit their careers.

“We are primed for this; we are ready,” said Lt. Col. Jessica Ruttenber, a 20-year career KC-135 Stratotanker pilot currently working as a mobility planner at the Pentagon. Ruttenber, who was instrumental in changing the cockpit height restriction policy, also sits on the Department of the Air Force's Barrier Analysis Working Group within the Women's Initiative Team. She is WIT's lead coordinator for pregnancy discrimination.

While a specific policy has yet to be unveiled by the Pentagon, Ruttenber is hopeful it will lead to universal change.

“I think we're gonna look back and say this year was a big milestone for women in service for pregnancy,” she said.

Heard on the Hill

Ruttenber runs a personal blog that discusses her Air Force career on top of raising three kids in a dual-military household. The site, hidden-barriers.org, has served as an open forum where women can contact Ruttenber, offer suggestions and share their own experiences of motherhood and service.

This year, a post about women sustaining a successful military career while starting a family caught one lawmaker's attention.

“You know, during the '50s, my mom was in the Navy, and she had to get out of the Navy because she became pregnant,” said Rep. Debra Haaland, a Democrat from New Mexico. Her father, a Marine, went on to have a 30-year career.

“Even though times have changed in that regard, pregnant military women are still experiencing microaggressions and subtle forms of discrimination,” she said in a recent interview.

It's one of the motivations behind the Equality for Military Mothers Amendment (EMMA) that Haaland introduced in the fiscal 2021 National Defense Authorization Act.

The amendment requires the defense secretary, along with the services, to develop a comprehensive plan “that ensures Armed Forces members are not unduly affected due to pregnancy, childbirth, or medical condition arising from pregnancy or childbirth,” according to the bill. House lawmakers backed the provision during a vote July 20.

“We have so many hearings where this subject comes up: Why don't we have more women in leadership positions? Why aren't more women getting promoted to these higher ranks?” Haaland said. “We need to give them opportunities to succeed.”

Both the House and Senate have passed their versions of the Fiscal 2021 NDAA; it now heads to conference. If the EMMA amendment makes it through, it would require the Pentagon to submit a plan 90 days from passage.

The services have each made maternity leave more flexible over the years in line with the DoD's Military Parental Leave Program. Currently, a birth parent can take six weeks of convalescent leave to recover from the birth; the services have also designated six additional weeks of “primary caregiver” leave, which is typically taken by the birth parent. The leave can be taken consecutively following convalescent leave, or any time within the first year of the child's birth or adoption.

The Army and Air Force allow a secondary caregiver to take 21 days — or three weeks — of leave; the Navy and Marine Corps provide 14 days.

Ruttenber said discrimination, conscious or not, often starts during maternity leave, with a woman's direct chain of command perceiving her as less dedicated or less competent if she chooses to start a family.

“Just because [women] might be taking some convalescent leave because they're pregnant, doesn't mean you should not hire them for a particular position,” she said. “[Commanders] may think they're protecting the individual to give [her] more time with family, but what they really need to do is to ask them what they want out of their career.

“Do they want to take that time off, or do they want to keep accelerating that time?” Ruttenber continued. “It's just, what is the balance of trying to stay relevant in your current job, while getting the right amount of time postpartum to have time with your baby?”

According to a Government Accountability Office study published in May, pregnancy was one of the top three reasons given for separation, between 2004 and 2013, by female enlisted women with five or fewer years of service. “These female service members stated that they felt they needed to ensure that pregnancy occurred at certain times in their careers to minimize negative career effects,” the GAO said.

There's more evidence to back up that claim.

Maj. Cary Balser, who works for the Air Force's plans and programs office, found that, within one year after birth, an active-duty woman in the Army or Air Force who took 12 weeks of leave instead of six was less likely to be promoted in comparison to her peers without children, and fathers, for that same time period. Balser was working on the study for his Ph.D. dissertation program at the University of Notre Dame, but not in an official Air Force capacity.

According to his findings, the negative trend especially impacted those between the ranks of E-4 to E-6. Balser studied data collected following the Pentagon's maternity leave policy change in 2016.

In a separate study, Balser found that the more time off active-duty mothers were granted, the more their mental and overall maternal health improved.

“We see very sharp decreases in postpartum depression rates,” he said. With increased paid leave, there was a decrease in mothers seeking health care services for acute or walk-in care for common problems experienced postpartum, such as high-blood pressure or infections.

That, in turn, improved their long-term health, he said.

The study found that time off to improve on an active-duty mother's well-being doesn't need to be taken consecutively. “Results suggest that policymakers should consider designing and more rigorously testing leave policies with different structures to better understand optimal policy design and the causes of maternal health challenges, especially on mental health,” Balser’s study states.

“There's probably room for thinking about non-continuously taken leave as a way to reduce stress for mothers just in general,” Balser said.

Women are also more likely to extend their time in service with improved maternity leave policies, per a study from CNA, a data analytics and research organization outside Washington, D.C.

“For about two years prior to the expansion of maternity leave, the reenlistment rates of male sailors were higher than those for female sailors,” according to Daniel Leeds, a research analyst in CNA's Resource and Force Readiness Division.

In 2015, Mabus tripled the Navy and Marine Corps' maternity leave from six weeks to 18. That was later rolled back to 12 weeks in January 2016 by then-Defense Secretary Ash Carter, but CNA's data found more women were opting for another term when they had more than six weeks of leave after having a baby.

Researchers also concluded that, while working weeks are lost due to additional maternity leave, the increases in reenlistment “more than offset these losses.”

Supporting women in their careers means eliminating or amending the policies that unnecessarily limit them, Ruttenber said.

According to the GAO, female service members interviewed for its report “stated that negative effects still persisted due to missed opportunities while pregnant, such as in-residence professional military education, or career field-specific problems, such as loss of flying time for pilots.”

Women don't necessarily want to admit their pregnancy too early for those reasons, Ruttenber said. “We also risk women's health by not addressing this … because they [put off] getting access to [obstetrician/gynecology] care,” she said.

Women are put on an occupational health profile once they disclose their pregnancies to their commanders.

“When you're put on a profile, you're no longer worldwide deployable,” Ruttenber said. But training exercises and professional military education, among other opportunities, should not be viewed in the same light as going to war.

“Women are pregnant for nine months. — they're not pregnant [their] entire [career],” Haaland added.

There have been steady changes.

For example, in September, the Air Force began allowing some female pilots to stay in the cockpit longer without need of a medical waiver, removing some restrictions on flying while pregnant and eliminating the requirement for “a higher headquarters waiver” for airmen with uncomplicated pregnancies to be able to return to flight.

This month, the service said it has begun allowing all pregnant and postpartum airmen to attend professional military education without requiring an exception to policy or a fitness assessment test first.

Meanwhile, the Washington state Army National Guard recently started a partnership with the National Security Innovation Network to examine how or if the Guard can put forth solutions for women who feel they must decide how long they wish to serve before getting pregnant because they believe doing so will force them to leave the service altogether or be considered non-deployable, according to Military Times. The network is interviewing students, civilians and service members for its study, with the intent of publishing policy recommendations.

Ruttenber said she felt the stigma or seen setbacks with each of her pregnancies.

“I always felt a little stifled and also, every time I had a baby, I was also grounded,” she said, referring to flight restrictions. “I found it extremely difficult to get a waiver at each location, as if I was the first person to ever fly pregnant. And I started watching other women just get frustrated, trying to get that waiver just to maintain basic qualifications.”

The nursing airman in Texas, who's also felt the same frustrations, said it shouldn't be this difficult to start a family while doing what she loves.

“I shouldn't have to give up a career I had worked so hard just to get started in just because there isn't support [that is] needed for pregnant moms, especially postpartum,” the airman said.

“Rather than guilting them for having a baby, support them,” she added.