President Donald Trump will preside over the commissioning of the Navy’s newest nuclear aircraft carrier, the USS Gerald R. Ford,... 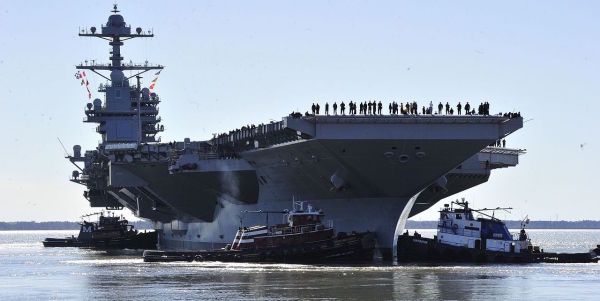 This is the president’s second visit this year to the $12.9 billion carrier. In March he called for a 12-carrier Navy while speaking to sailors and workers from the Ford’s hangar bay at Newport News Shipbuilding, where it was constructed.

Trump made headlines in May when he told Time magazine that the Ford’s Electromagnetic Aircraft Launch System, which replaces the decades-old steam catapult system, should be scrapped because it costs too much and is “no good.”

EMALS, as the new system is called, is scheduled for construction on the next two carriers in the Ford class, the future USS John F. Kennedy and USS Enterprise.

Susan Ford Bales, daughter of the carrier’s namesake and 38th president, is expected to officially declare the Ford a “United States Ship” during the ceremony.

The Ford is the Navy’s most expensive and advanced aircraft carrier. It was delivered to the Navy on May 31 and is expected to become fully operational by 2020.